I am way behind on blogging! I still have some posts from January to do,but I figured it was time to skip those until a later date and blog about our new furniture!!!!!! Grant and I had two papasaun chairs that were comfy,but just not the look we were going for. We also wanted to sell them and not give them away since they were in perfect shape! Once sold, we bought a between time couch. We will eventually buy ourselves the Karlstad leather couch in black with a metal underframe from Ikea, but since it is expensive, we are waiting until we have the funds. 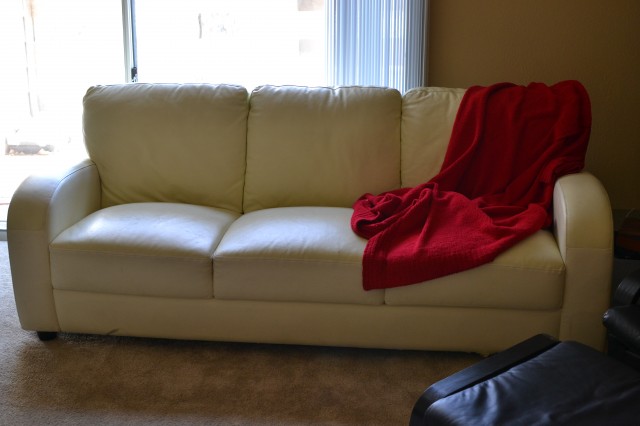 Here is our $50.00 couch from Craigslist. It has some scuffs and cracks in the faux leather,but it is comfortable and a couch! It is a cream color which isn’t the best because it makes everything look more yellow in our apartment,but for now it is great. 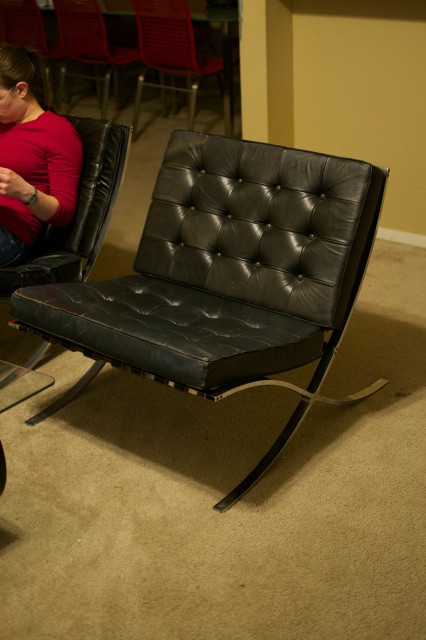 Next are our two Barcelona chairs! In order for you to understand the amazingness of these chairs you need to know the history! These chairs were designed in 1929 by Ludwig Mies van der Rohe for a German Pavilion, which was hosted by Barcelona Spain hence the name of the Barcelona Chair.Â  The original chairs are now lost, and the suggest retail price from Knoll ,who is the offical manufacturer, is around $7183 for the stainless steel version. It showsÂ  how the design is timeless if it can still be used in today’s homes. Anyway, a knockoff version or non Knoll version can start around $1600 a piece which is still very pricey! 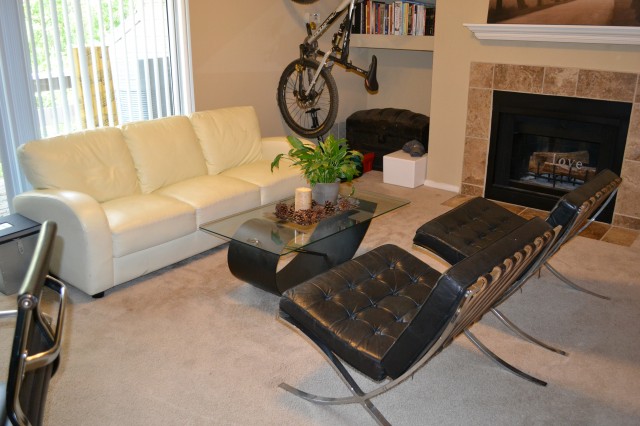 We were able to find these two chairs for $500 which is an outrageous price even though they are knock offs. The only reason we got that price is because these chairs are 25 years old which is older than both Grant and I! We asked the architect that we bought it from what he would replace them with, and he said another newer set. The leather in the first picture is a little dry looking since it is older. I did some research, and found you can polish leather like you do with shoes so the last two pictures are the after ones.

Here is another view. I love that our apartment is slowly starting to look like a living room rather than a college/bachelor pad room. Also, the most important part of the Barcelona chairs is they are nice and wide… if we pushed them together like a couch they could fit 3 people.

love the chairs! what a great deal!!

Those chairs look like they are properly oriented for how people really sit.

Hello
I have a question about the dining room chairs.
I know u bought from Craigslist but who makes them?
And I love their new look.
Thanks

Nez,
The chairs are now over 4 years old and still in great condition. They are still sold at Ikea. Here is the link: http://www.ikea.com/us/en/catalog/products/50076304/ I spray painted them myself, but you can see the before and after here. https://warfieldfamily.com/2011/01/our-new-and-improved-dining-set/ If I could do it again, I would have just dyed the fibers, but that is ok.