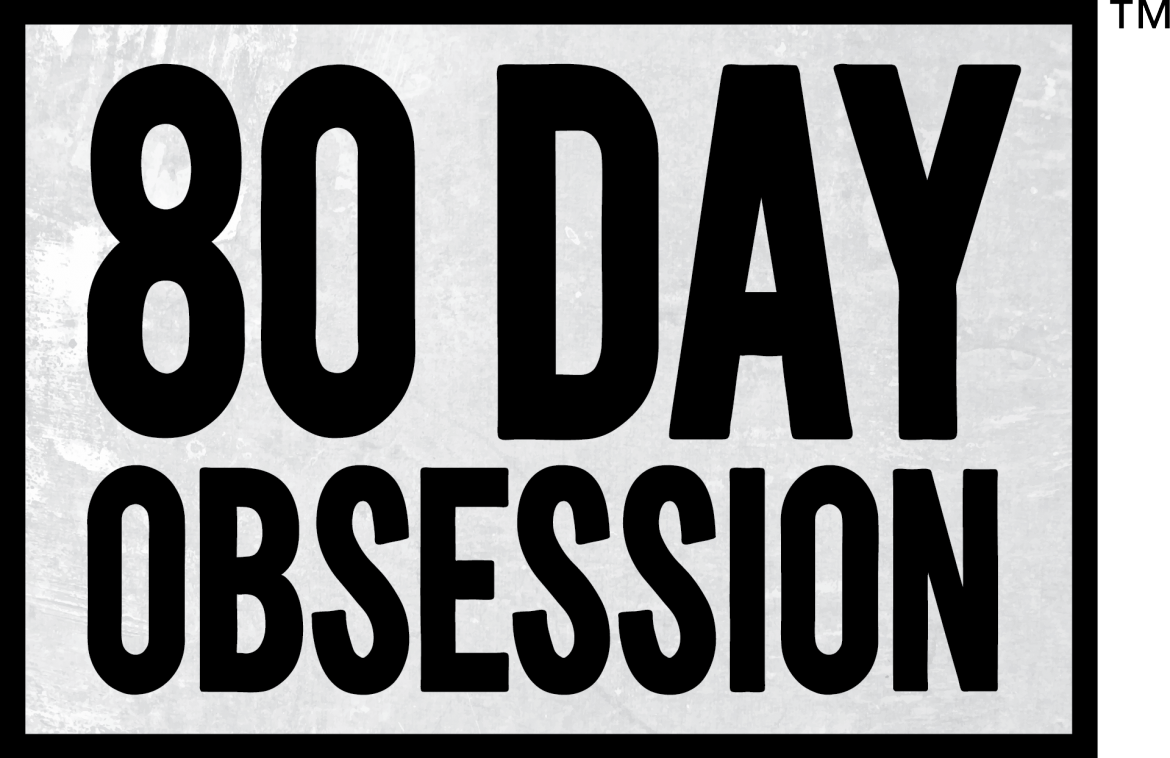 So this is week 6, and out first ReFeed day where we get to eat more carbs with white flours and fruits to help rebuild stuff in the muscles. Refeed day was worse for me, because it helped some of my cravings come back, but all in all it was nice eat ing more fruit and “healthier” sweets and different carbs for a change. Instead of doing the meal plan break out, I figured I would just list the meals that we ate in random orders this week as more of a meal plan inspiration. 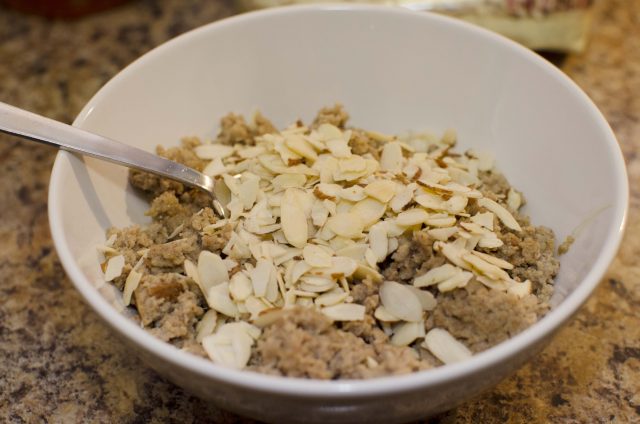 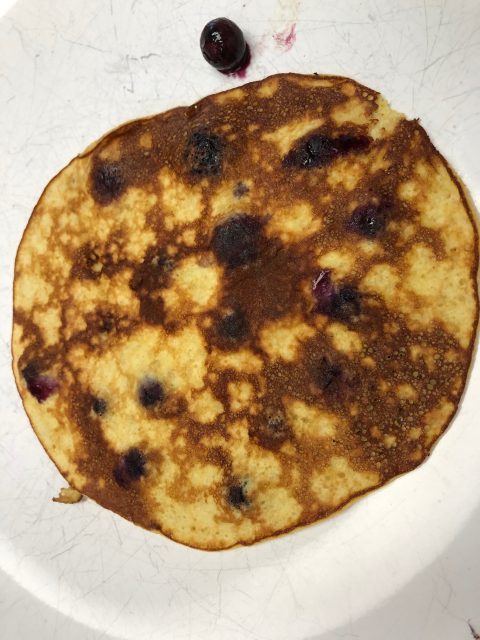 If you are wanting another option than this, you can make these 2 Ingredient Pancakes. I normally add blueberries to mine while in the pan so they get nice and warm too, but this blogger sometimes just add some peanut butter to it. So the containers are almost the same as my scramble above. Also, on either of these recipes, the more ripe your bananas, the sweeter they will taste. 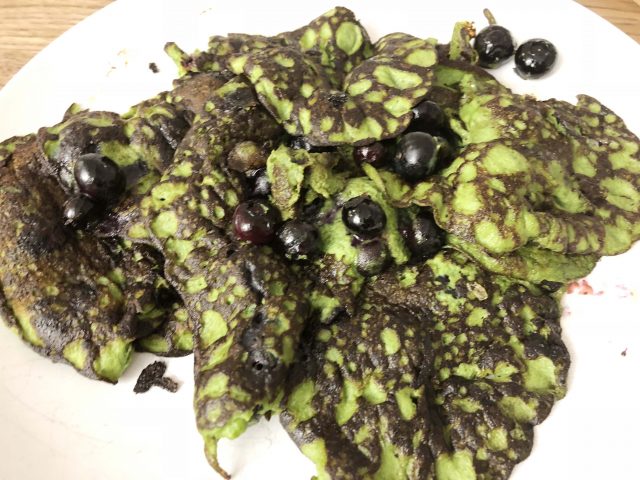 This week I was a little bit more adventurous and added spinach to the batter, the kids were a little hesitant to try it because it doesn’t look very tasty, but now love it. I don’t love hiding veggies in foods, but this was just an easy way to add extract greens to a meal. I tried adding it to french toast scramble above and it was okay. The kids ate it, but it wasn’t my favorite. 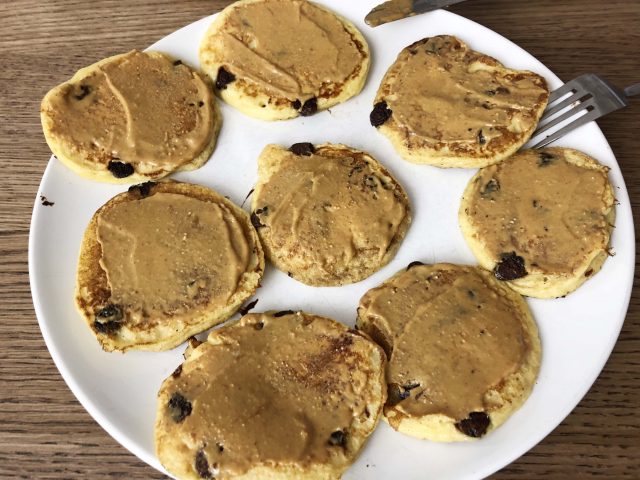 On Saturday and Sundays, we have started making our favorite Protein Pancake Recipe. It comes out to 1.5  Red, 1 Yellow, and 2 teaspoons with the peanut butter with 8 small pancakes being one serving size. Since we add chocolate chips, we don’t add chocolate chips to our chunky monkey in the evenings. 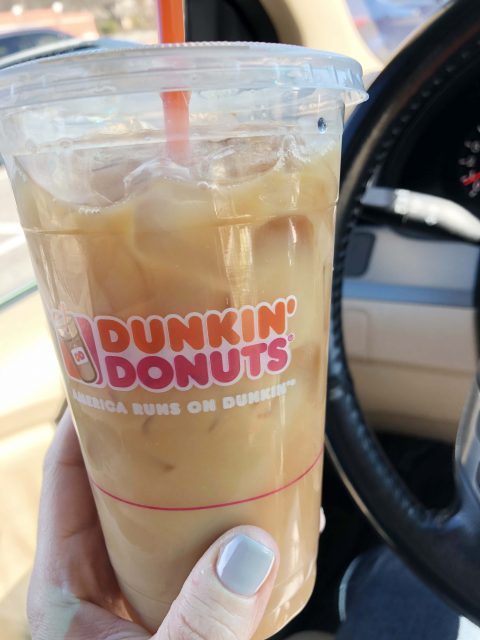 If you like Iced Coffee, then you can always give Dunkin Donuts a try. They have flavor shots NOT SWIRLS, which don’t have sugar added. So I occasionally get an iced coffee with almond milk, and a shot of french vanilla and hazelnut. It isn’t sweet, but has some flavor and is a nice indulgence at times. 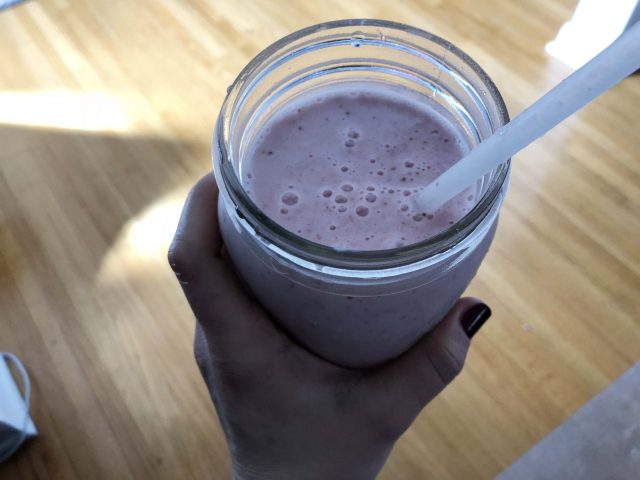 I made this Greek Strawberry Banana Shake Recipe. It was a nice change up meal wise. 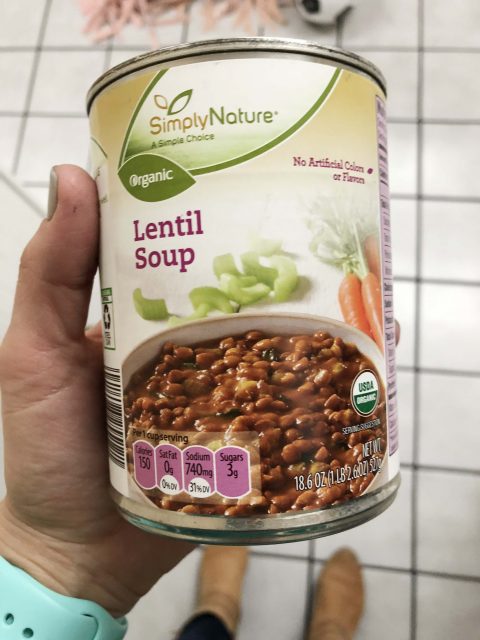 If you need a quick grab and go side in your meals, this Lentil soup, from aldi is pretty tasty.  Just heat it up, and measure out your portions to count as 1 Yellow and 1 Green. Also, adding a splash of balsamic vinegar makes it super good. Sebastian also really likes it where Reese isn’t thrilled with it. 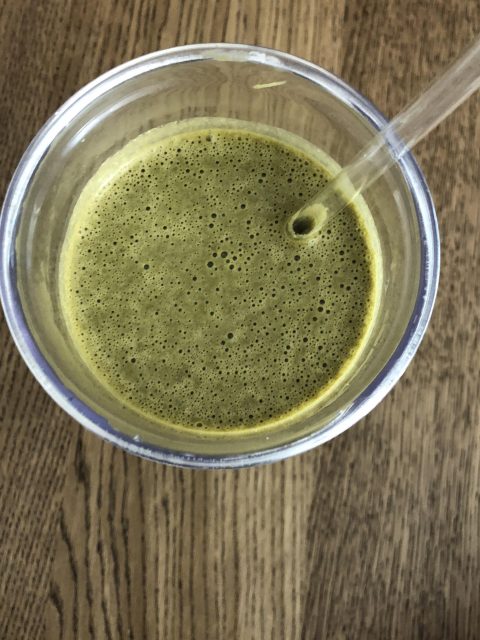 Then my shake which I use THIS powder instead of Shakeology because it is much cheaper and has very similar nutrition. Then it shows what others things I added to my shake above. It is only green because I like adding spinach to my shakes since I can’t taste it, and it is an easy way to add greens. (I like Mocha and chocolate flavors the best.) 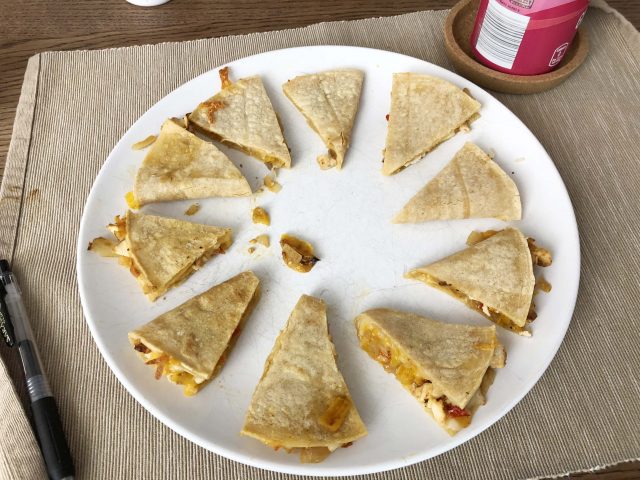 We did Fajitas again this week, this time we saved all our Blue for dinner so we could make them more like a fajita Quesadilla. We used this recipe. 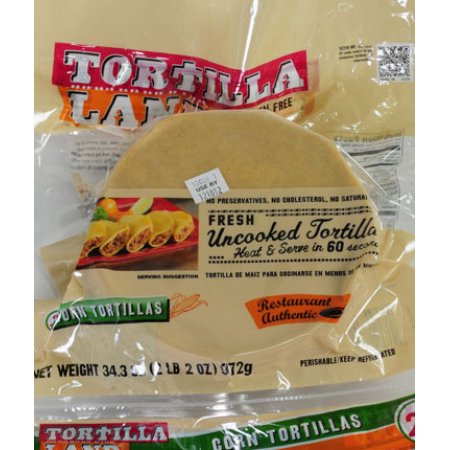 I’m not a fan of corn tortillas, but this brand , which I found at Walmart, is super tasty. Trust me, the uncooked is worth it! 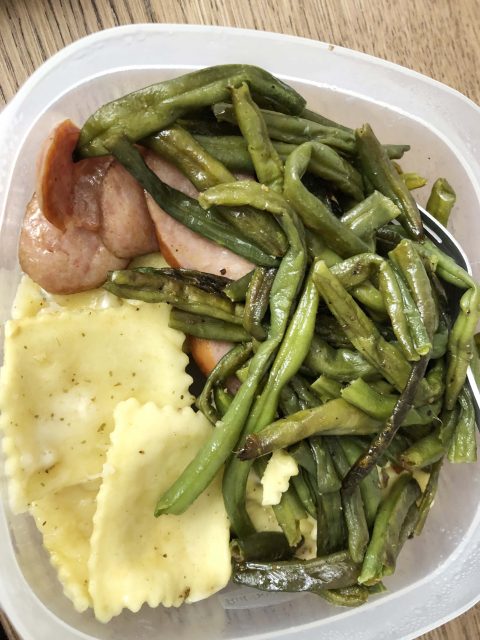 On Refeed day, we are able to eat some white pasta and other items like that. I found this shrimp and crab ravioli at Aldi which is amazing! A whole bag is 4 yellow servings, so I only made half, and saved the other for the next refeed day. After boiling, I put a small amount of olive oil, parmesan cheese, salt, pepper, and Italian Seasoning (knorr German) on it. I also added a tad bit of smoked summer sausage to make sure there was enough protein in the meal above. 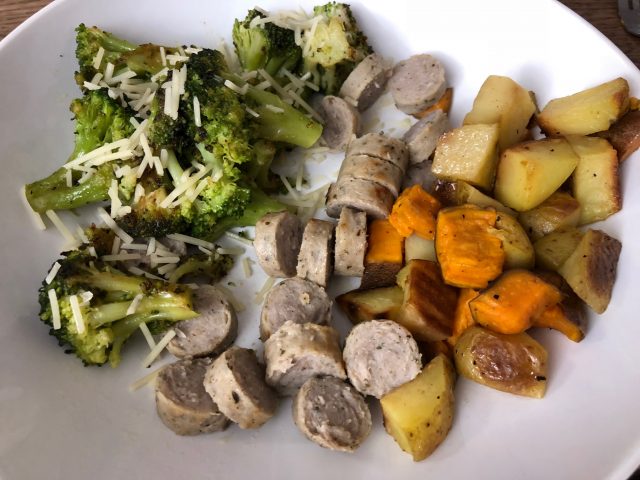 Part of the week we used the Deutsche Kuche Bratwurst from Aldi for meals, but later switched to the smoked sausage. 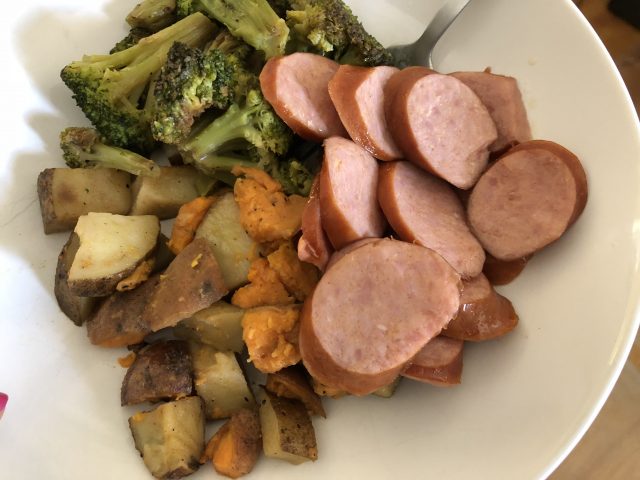 We also ate a lot of roasted potatoes using this recipe since it is easy to make and lasts well when meal prepping. 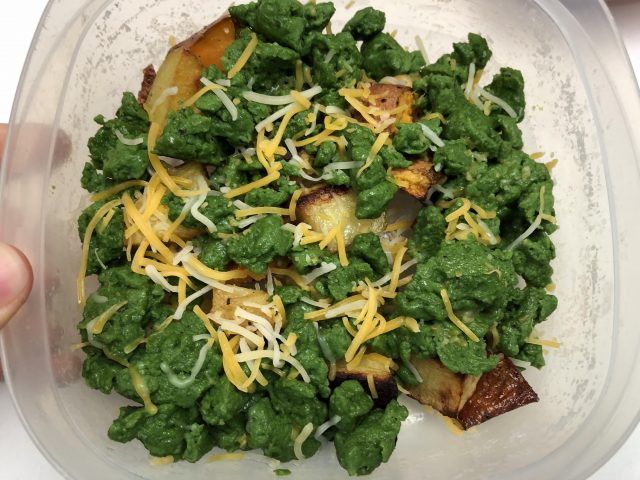 We also did some Eggs with pureed spinach with roasted poatoes as one of our lunches. It is quick, easy, and yummy; not to mention cheaper since the protein is from eggs. I like to top it with some homemade salsa. 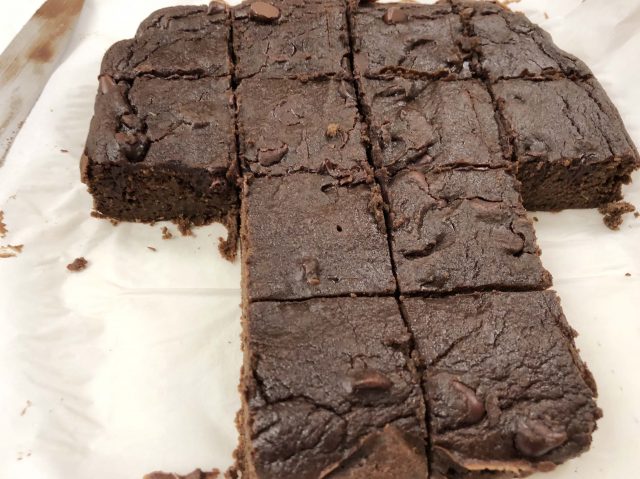 Here is a gluten free brownie recipe that I am really happy with.  It uses chickpeas instead of flour, and I think it tastes good. Is it the best brownie ever? No, but I don’t feel like I am eating a “healthy” dessert. It is officially approved for 80 day obsession, but I wouldn’t go around eating it all of the time, but for occasions where you are craving sweets you could use this to help satisfy that craving. 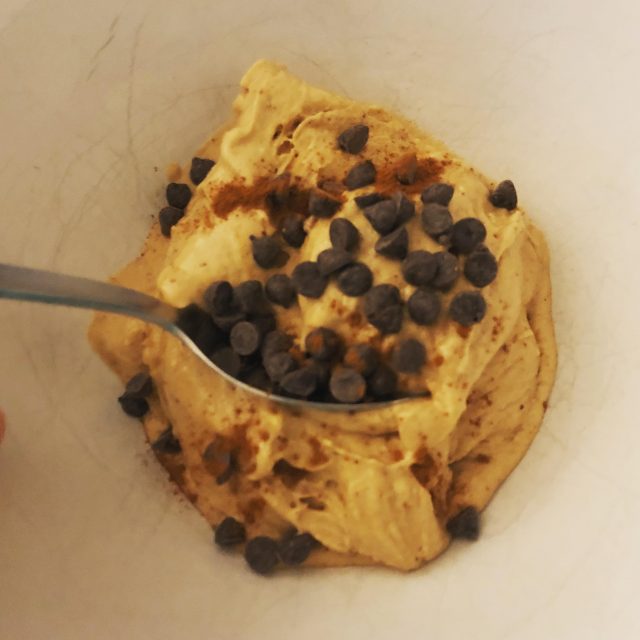 As I mentioned I have a sweet tooth, so at night I have been saving a fruit, and containers for a peanut butter. I don’t do this every night, but sometimes I make Chunky Monkey. It is one frozen banana that is ground until smooth in a strong blender. It will take a bit of time and you will need to scrape down the sides, but once it looks like soft serve ice cream add peanut butter, and top with a dash of cinnamon and a few mini chocolate chips. It is really really good. I have seen others make this ice cream as a base and add in just fruits to make it taste more like a sorbet. I hope you enjoy.

Hope you have a great week.