There are times when you can easily change a recipe to work for Keto,but whenever I find one that is already Keto it makes it all the better! 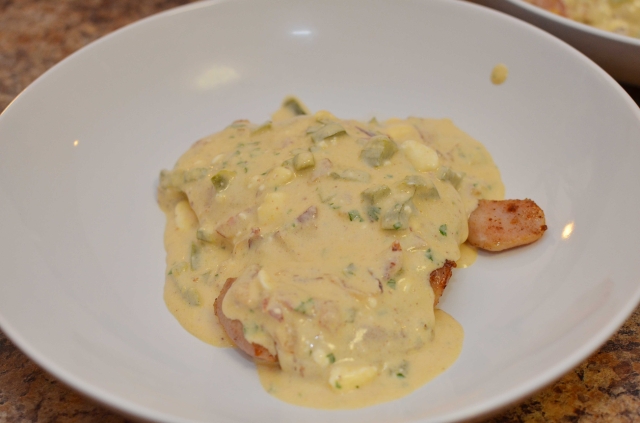 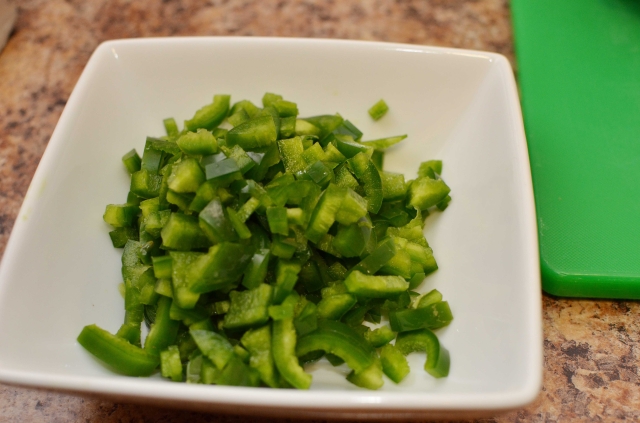 Chop your Jalapeños without the seeds unless you like it really spicy. 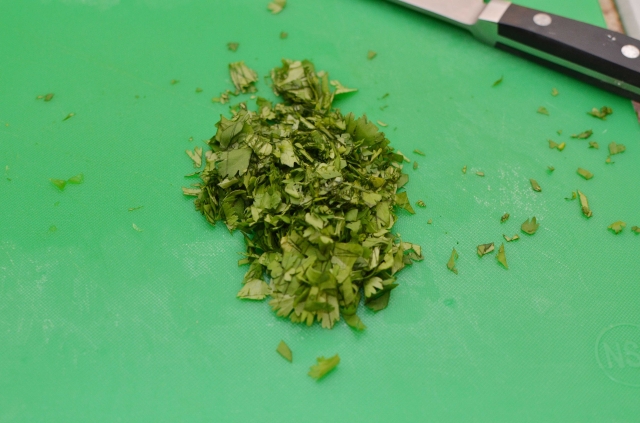 Grate your cheese, I do it in the Vitamix. 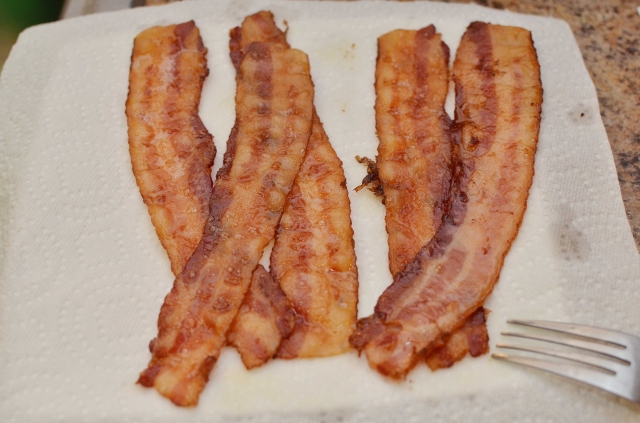 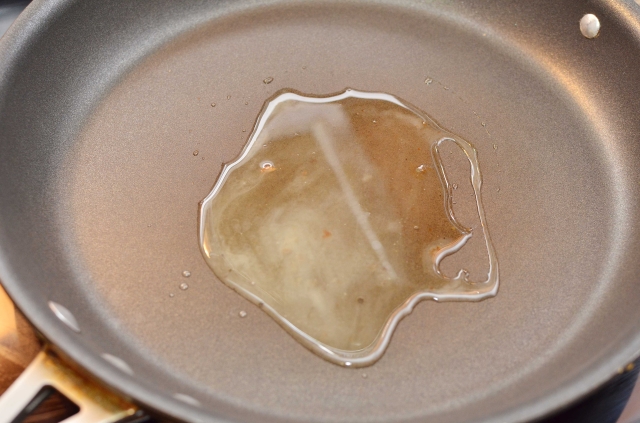 Put some bacon grease in a pan. 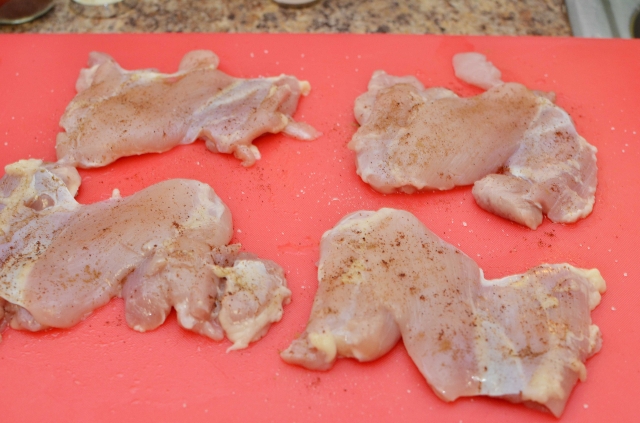 Season your chicken, I tried it with chicken thighs, but wasn’t that great, the second time I made it with Breasts and it was SO MUCH BETTER! 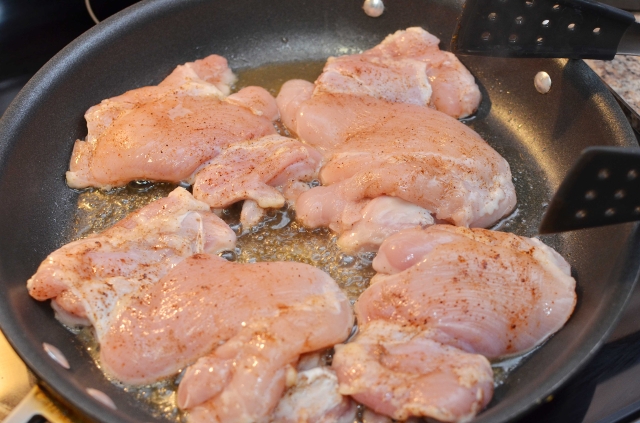 Fry/cook on both sides until done and juices run clear. 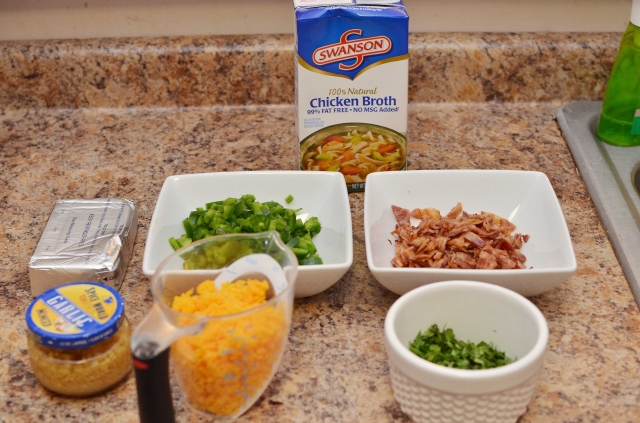 I like to have everything laid out so I can grab and go while cooking, I don’t leave things out then. 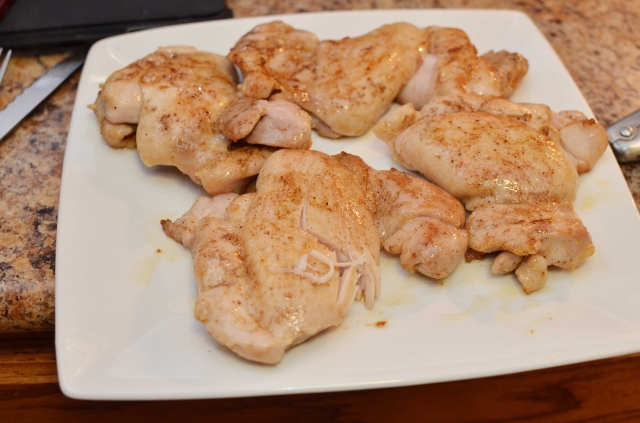 Once chicken was done, I just put it on an oven safe plate and popped it in there to keep it warm. 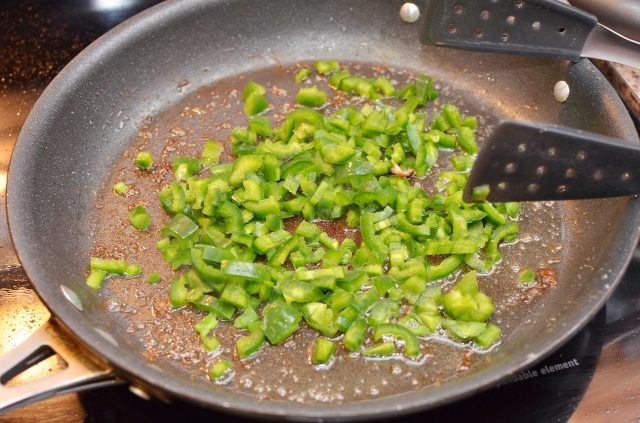 Without cleaning the pan, place the jalapeños in it. 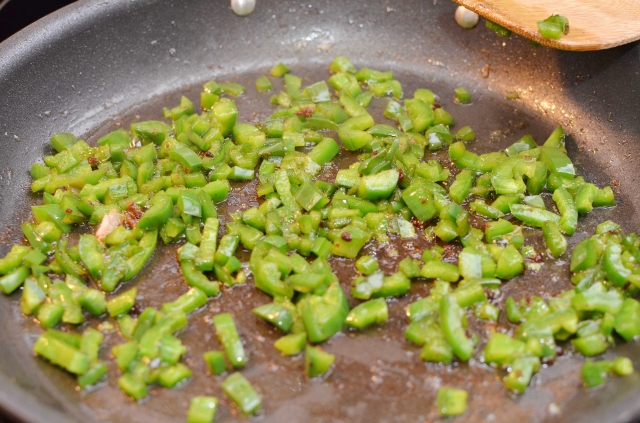 Make sure to scrape the bottom of the pan, you want that crunchy goodness in our sauce. 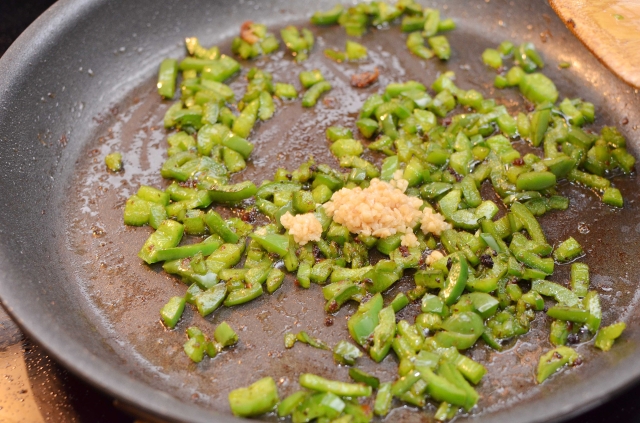 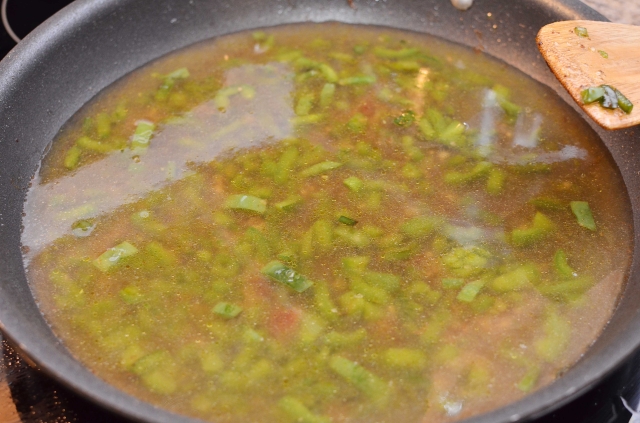 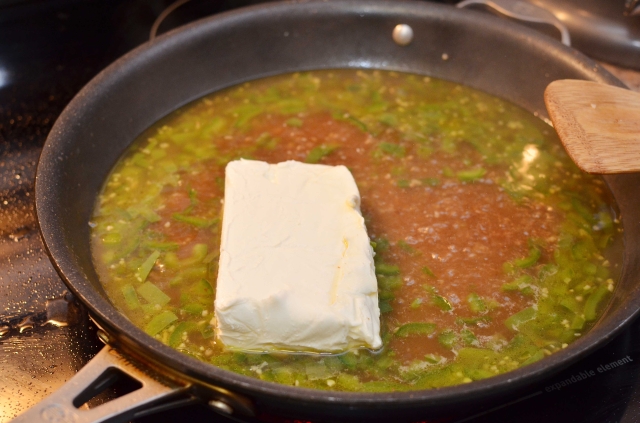 Then the block of cream cheese. 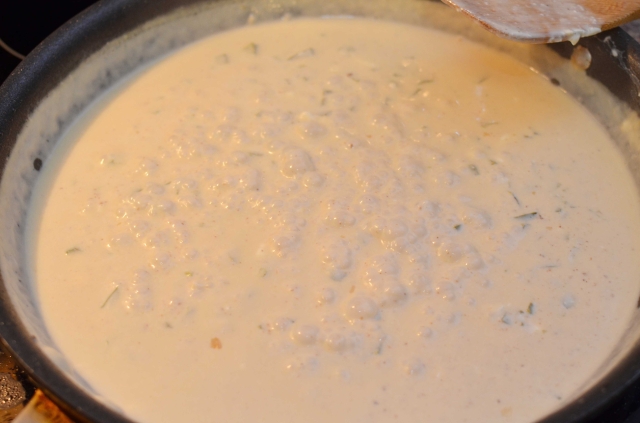 Keep stirring until it is melted. 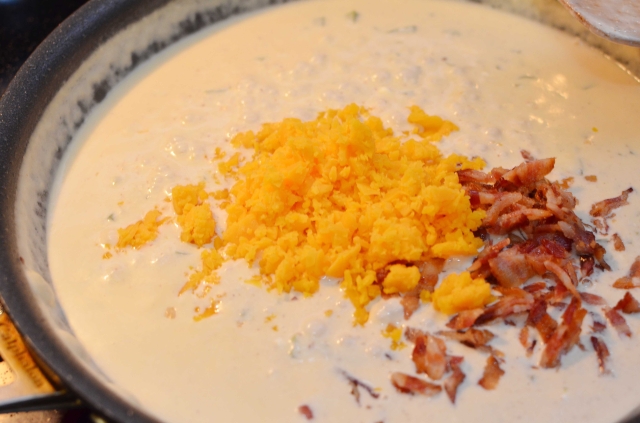 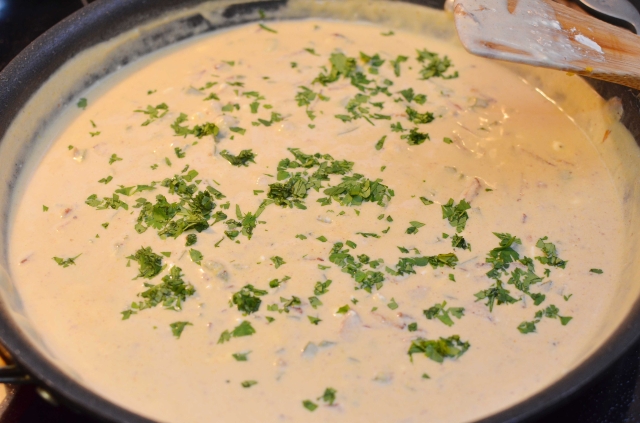 Then add cilantro, I only added as much as the recipe called for,but had more on hand for those who like more cilantro. 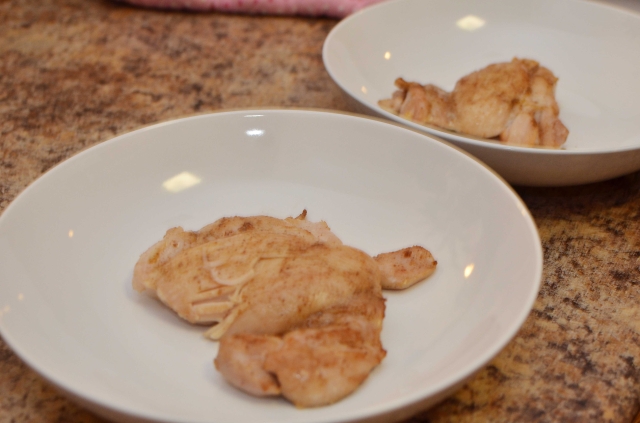 Take your chicken and top with the sauce.

Sorry about the white chunks, I thought my cream cheese was completely melted. So a total of 2 net carbs per serving assuming you eat all the sauce, and we had enough for almost 6 meals, but I wanted it to be on the conservative side. Enjoy! 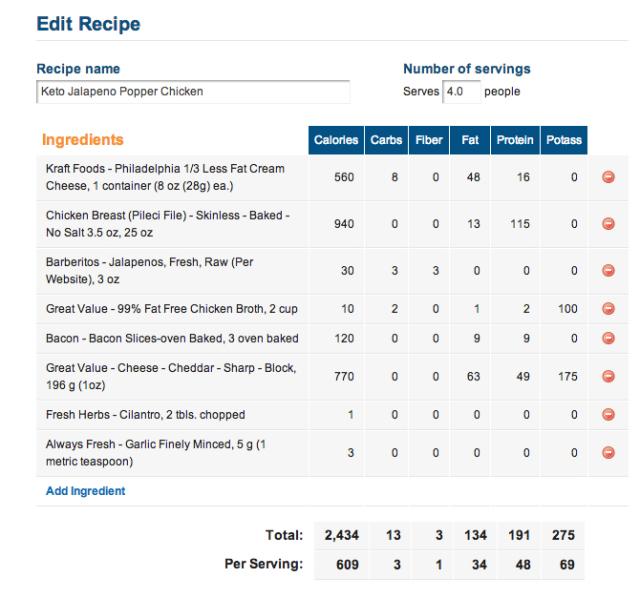 Fry bacon until crisp. Remove to paper towel-lined plate. Sprinkle chicken with seasonings while the bacon crisps. Add the chicken to the hot bacon fat in the skillet. Cook chicken, turning every few minutes, until juices run clear and no longer pink. Remove from skillet and keep warm. Add chopped jalapeños  to the skillet and cook for a couple of minutes. Add garlic and cook for 30 seconds to a minute more, until fragrant. Add chicken broth, deglazing pan. Bring to a boil. Add cream cheese and stir until melted and smooth. Add in shredded cheese and bacon, stirring until the cheese in melted. Turn off heat and stir in cilantro. Serve chicken topped with sauce. Garnish with additional cilantro if desired.

Please let me know if you have any questions on this!

It looks and sounds delicious!

Made this last night, I bought smooth Jalapenos so they were very mild, even my 3 and 6yr old Loved it! It almost tasted like Nacho cheese. SO good! We will be making this again! Thanks so much for these recipes. This has become our go-to site for recipes.

I’m sooo glad you liked them! I think these have great flavor to them, and I hope you enjoy the other recipes that I post! 🙂

Just made this and all I can say is WOW! It was so good even my picky husband liked this. Definitely a new family favorite!

I’m so glad you liked it!

Hello, boy am I glad I stumbled across your website! Your recipes not only look amazing but are really simple to make. FYI, when mixing in the cream cheese, try using a whisk instead of a wooden spoon. It’s much easier and ‘no lumps!’ Cheers form Australia!