One Month Update – The stats for these posts are taken on the day Reese turned 1 months old, but all of the information and content is everything up until the point she turns 1 months old. (5/11/15-6/11/15) 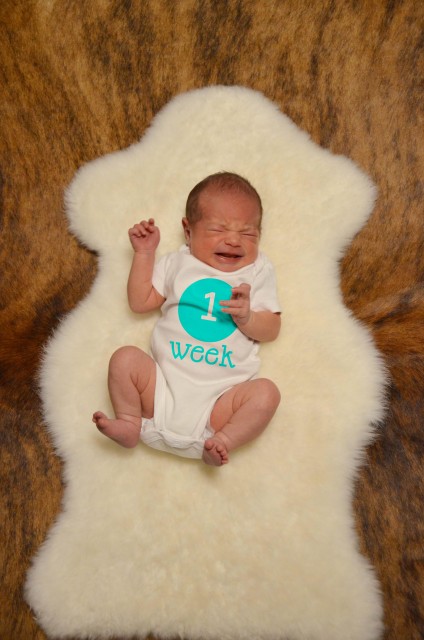 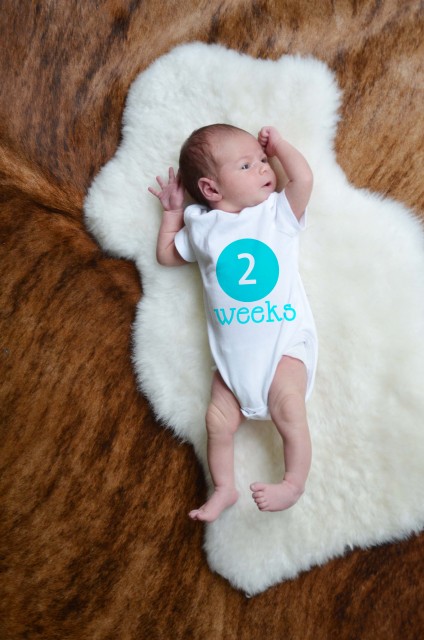 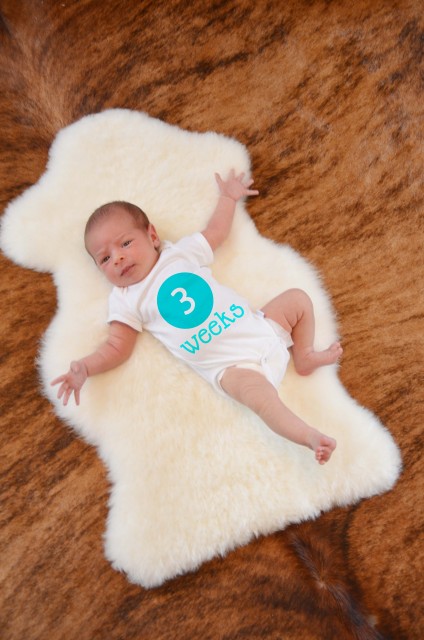 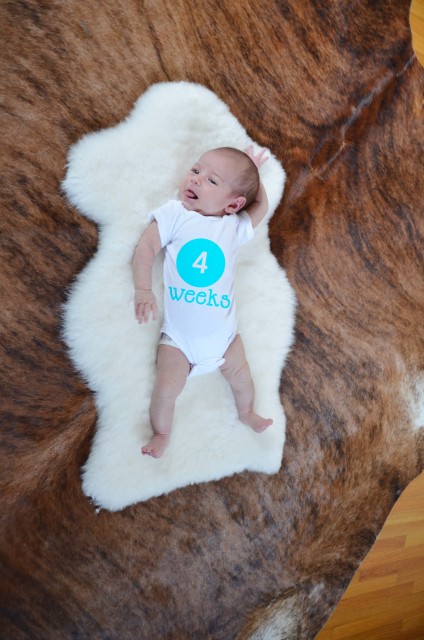 Reese still has blue eyes, so we are interested to see if she keeps them or not.

The longest stretch of sleep she gave us this month was a few 5-6 hour stretches,but during growth spurts, or once we got used to one longer stretch she decided to go back to every 1.5-2 hours to feed.

Reese likes her swing, and loves napping in it. She is only so-so about her pacifier. Sometimes she takes it,but really doesn’t love it.

Reese had really good neck control from the beginning which really relieved Grant as the neck always made him nervous.

Reese is very tall and skinny, so we have been having her in 3 month clothes for the length, and at the two week appointment had to move the straps up in her car seat so she could fit. We will see if she stays tall or grows into her height.

Reese has been gaining weight well, and breastfeeding has been going great. At birth she was 7lbs. 9 ounces, we left the hospital with her weighing 7lbs. Then at her 5 day old appointment she was already 7lbs. 2 ounces. At her two week check up she was 7lbs. 12 ounces. There were a few things that I had to figure out, and from there it was smooth sailing. I had to cut out dairy, chocolate, beans, and peanuts. (I don’t know if the peanuts are an issue,but I need to be off of them long enough to then be able to reintroduce them to see if she has any reactions.) I also wasn’t nursing her long enough on one breast. I now know to let her nurse around 10-15 minutes on one side before offering the other. So, she was getting way to much foremilk rather than the hindmilk in the beginning.

Reese is hard to burp, I have to try over the shoulder, sitting up, and then on her tummy to try and get all of the air out.

Reese had really bad gas in the beginning where she would get beat red, cry almost colic like for hours, and scream. We tried bicycling her legs, massaging her tummy, burping her more, etc. The biggest things that helped were getting her to nurse with more hindmilk, I guess the foremilk has more lactose and can cause gas in babies, me cutting out dairy, and trying longer to burp her. Once I cut out the dairy and beans, we noticed a huge difference. She would still be fussy when she was tired,but no more colicy crying or turning beat red.

Reese does a very cute little squawk at random times. If she does it in her sleep, she wakes herself up, and it was super cute.

Reese’s favorite way to sleep is her head way back. She also likes to have her arms above her head and sleeps with her mouth open both just like her Papa.

The first week home, she only slept when she was being held so we would take shifts where one of us would hold her while the other slept. After that first week, we started putting her down in the pack and play next to our bed. She didn’t sleep for long stretches at first,but we persevered because we didn’t want her to only sleep while someone was holding her or only be rocked.  A few times Grant woke up at night very groggy asking me where Reese was, and I would have to remind him she was in the pack and play since we didn’t really let her cosleep with us in the bed. There were a few times in the early morning that she would be in bed with us while we all cuddled, but we were awake during those times. Then one of my favorite things that Grant did is, one night she was crying while I was trying to get everything ready (pillows and boppy) to feed her during the night, and Grant started patting his stomach(where she would sometimes lay when they did skin to skin) as if she was on his stomach to calm her down when he was dead asleep and not even holding her. 🙂

We have a routine where she would wake up to eat, I would feed, then she would get close to falling asleep so I would wake up Grant, we would change her diaper, and then I would feed again and put her down to sleep. The whole process took about an hour each time, and if I was lucky she would sleep for an hour in the beginning,but most of the time those stretches got longer and longer. But during the diaper changes she would love to stretch since we unswaddled her, and would give Grant the biggest smiles ever during those times.  She also would cry and whine cry when I wasn’t getting her, her food fast enough. Reese goes from dead asleep to Hangry (Hungry/Angry) within a few seconds just like her Papa.

Reese loves being outdoors. During her fussy times, we would take her outside, and she would normally calm down.

This month, she hasn’t had much of a sleep schedule, and we aren’t trying to enforce one that much since she is still so young. There were a few times in the pack and play that we would have to let her cry it out for a max of five minutes. We knew she was super tired,but she would just refuse to sleep because she wasn’t being held. So just a few minutes, and then she would go to sleep. Boy those few minutes were torcher, but we set a timer and made it through.

Reese likes to be swaddled and sleeps better that way, but we can tell she would prefer her arms out,but since she would hit herself in the face or scratch her face we had to swaddle her. Her nails grow so fast, I have to trim or file them all the time which is super scary because I’m terrified of hurting her.

Reese likes to see what is going on, she likes being upright on Papa’s shoulders with both arms hanging over the shoulder. She likes being in her ergo especially on walks.

Reese like techno music in the car and calms down in general more when it is on.

Reese hated her first bath, but since then she really likes them as long as we keep the water very warm.

Reese doesn’t like being cold. She gets bored very easily, and won’t just be happy to sit around like some babies I have seen. She prefers us to engage with her.

Reese started some tracking a little bit with her eyes,but you can tell the focus is still pretty broad. She loves seeing contrast, so a lot of our furniture is black and our walls white so she really likes looking at the couch, our bookcase,etc.

Reese’s petname from us is kleine Maus which means little mouse in german. We keep having to remind ourselves to call her Reese because otherwise she will think her name is Maus.

We plan to move her to her bedroom and crib around 6 weeks. Right now she is napping in people’s arms, her swing, and a few times in the pack and play. We had so many visitors during the first month that there was always someone to hold her, and we have always been told you cannot spoil a newborn. She also sleeps in her nest which are receiving blankets from the hospital rolled into a U shape. This makes it so we can swaddle her, and lay her on her side but won’t be able to roll over onto her stomach or face. Also, if she spits up, it was able to dribble out of the side of her mouth rather than choking her. She also uses a sound machine that we plan to wean her off of, but Kira and Andrew let us borrow their extra one until ours came in the mail.

Reese is still wearing newborn diapers, but we did notice that the honest diapers we were given were a lot bigger than the huggies and parents choice newborn diapers. We plan to cloth diaper,but we wanted to wait until she was a little bit bigger. One because she is going through soo many diapers as a newborn, and we need her thighs to be a little bit thicker to keep stuff from leaking out of them.

Reese has my pinky toes, attached ear lobes, cupid’s bow, and eye color(at least right now.) Reese has Grant’s face shape, hair color, nose, and all other features as far as we can tell based on the few baby pictures we have seen. I know these can all change since she already looks so different now than her birth pictures.

Reese’s umbilical cord fell off at 4 days old which was awesome! The pediatrician showed us how to clean everything,but it made diaper changes and clothes so much easier. We are borrowing clothes which means she isn’t always dressed in the cutest stuff since her height makes it harder to dress,but she is a baby and doesn’t care. We are slowly going through and giving clothes back to Kira and Andrew; for instance, all of the newborn clothes we already had to give back since they don’t fit. We are so grateful though that we are able to borrow all of Alana’s old clothes. Grant isn’t a fan of big bows and lots of pink. So, when we are out in public people always think she is a boy,but we aren’t too fazed by it. Since it is really hard to tell with most babies their sex until they get older.

So far, Grant and I think Reese is a pretty easy baby. There were some rough times,but with the advice from friends, family, and the internet we are slowly figuring things out. We love her so much, and it is crazy how much having a child changes you. You become so much more interested in other people’s kids because you are in the same phase of life. We also wanted to thank all of our friends and family again who visited us, helped clean our house, helped cook us meals, and have just loved on us as a family.
0 comment
0
FacebookTwitterPinterestEmail

How to Consolidate Make Up into a single Palette