Last year, our family decided that we would celebrate Thanksgiving instead of Christmas together due to the fact that my sister Kira was due with her son at the end of January which made travels in the end of December not possible. So, Grant, Reese, and I had our tickets booked for an early Thanksgiving around the middle of November. Unfortunately, my Grandmother who had alzheimers ended up having a stroke and died at the beginning of November. So we had to change our plans. Now, I had to fly by myself with Reese a week early so that I could attend the funeral, and then a week later Grant would join us for the time he had taken off of work for our family get together. The other bummer is with our first flight we just lost out on the money of my first leg of my flight, and it was no longer a one way flight which we had paid extra for. We also found out that if you don’t take the first leg of your round trip ticket, the airline will cancel your return flight without telling you. We got it worked out in the end,but they said since we didn’t call to say we would still be taking my return flight, they automatically cancel it. This was news to us… I figured if you pay for it, it is yours. Any hoo, here is a recap of the first portion of our visit. 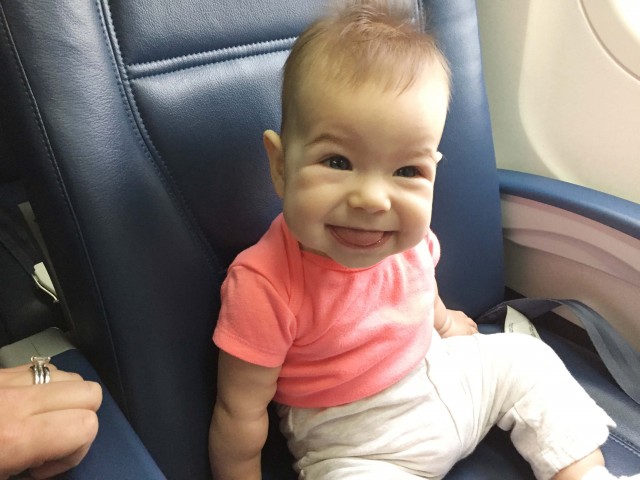 Reese on her first airplane ride at 6 months old. 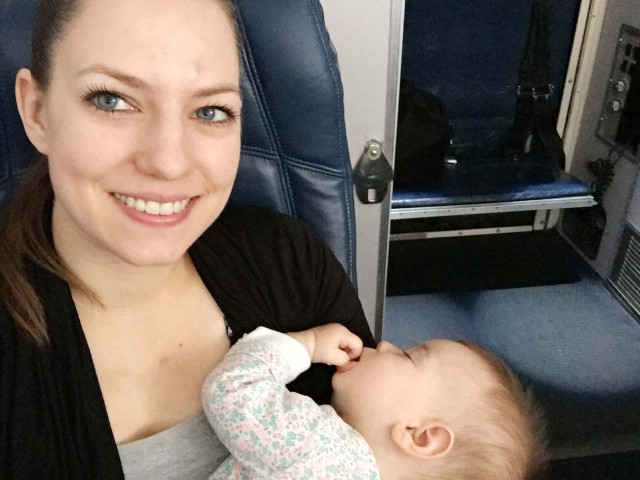 She was a champ, and slept during both flights thanks to nursing during take off and it being during her nap time. Everyone complimented me that they didn’t even know there was an infant on the plane. I know I totally lucked out,but it was a huge stress reliever. 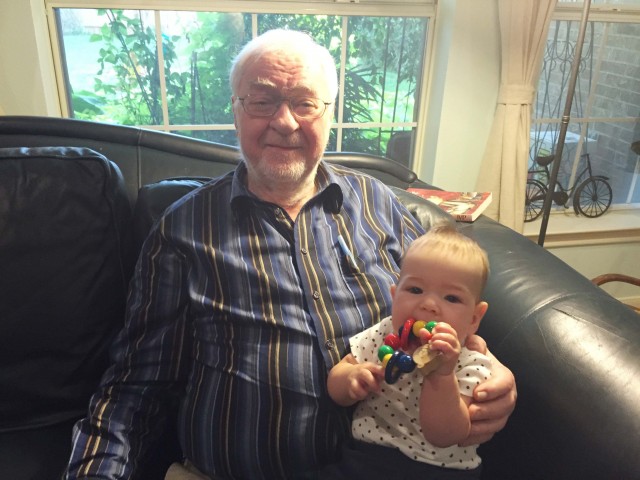 Reese got to meet her Uhr Opa for the first time which was loads of fun. 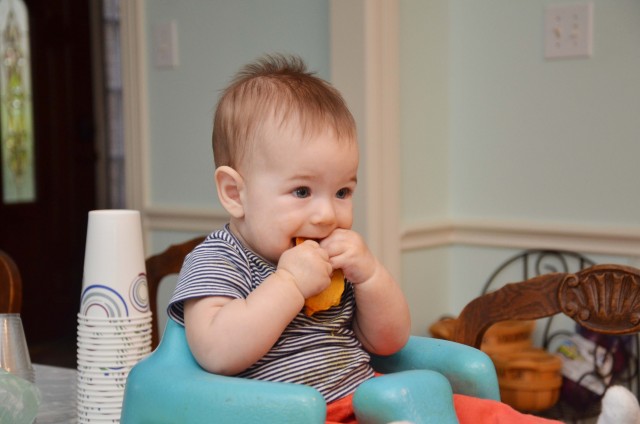 She got to try all kinds of new foods like fish soup and dried mangos. 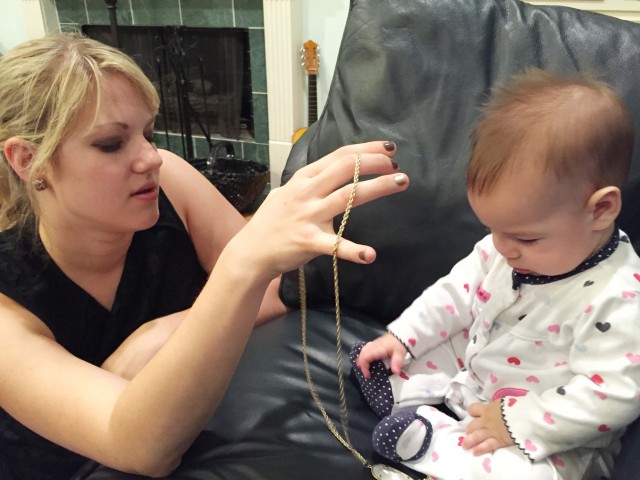 All of my family was coming to the funeral in different ways. My sister Kira had to fly into Abilene for the funeral and back out again since she had to work. Most of the family drove from their respective cities to get there. I flew in to Houston and then drove with my parents since they had the space in their van for us.  We ended up getting a later start than we expected,but it was supposed to be a 6 hour drive so we should have had plenty of time to get to the calling hours on time. 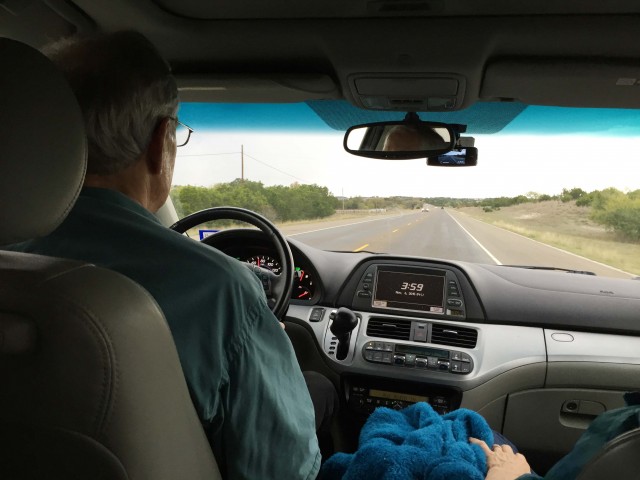 Papa in the front listening to an audiobook while driving. 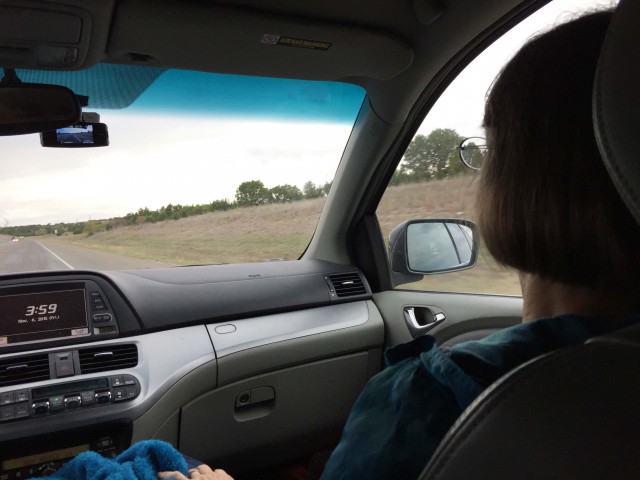 Mama listening in the front too. 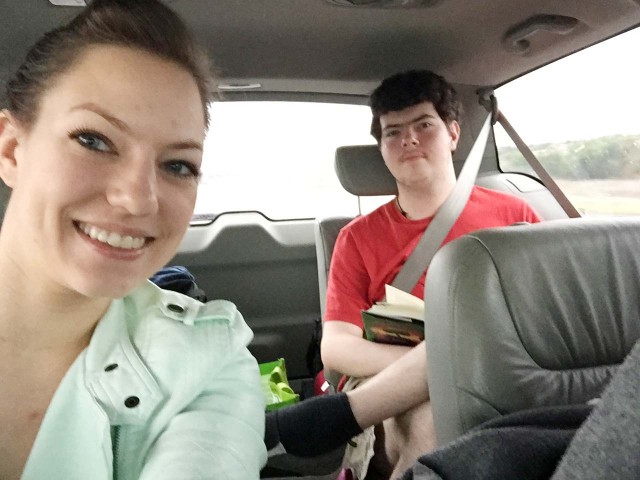 Jason, Reese(Seat next to me), and I.

Reese giving Jason a death stare on the ride. 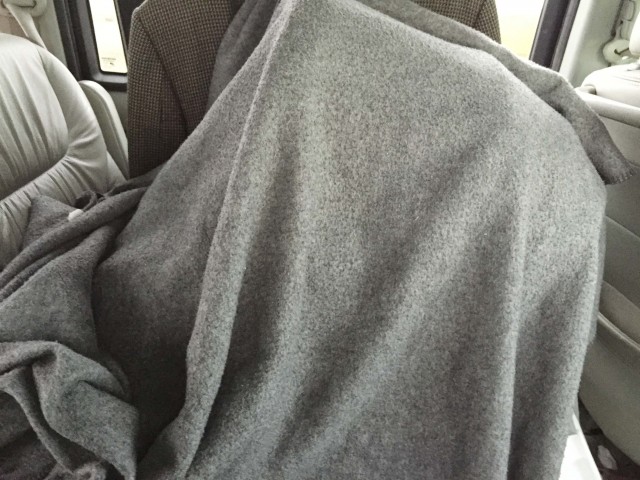 Reese during one of her naps.

The trip ended up taking 8 hours total which pushed Reese to her breaking point. Reese hates her car seat and riding in a car for too long. She took the naps she was supposed to take no problem,but I think how loud the audiobook was turned up in the car bothered her. Also, we ended up losing one hour by getting to a standstill in a town where a train had broken down and blocked literally every road out. So we had to completely backtrack. Also, my parents LOVE to eat at cracker barrel when on road trips. So, since we had an alternate route, Papa wanted to eat at a cracker barrel which happened to be smack dab in the middle of Austin during rush hour which then cost us another hour. We made it to Abilene an hour late for the calling hours. So we made it to the funeral home, all hopped out, changed clothes there, and then were there until about 8-9pm. Reese’s normal bedtime was 6pm,but she was a champ since I think she was so happy to be out of the car.

Kira, Reese, and I shared a room at my Aunt Terri’s house which was so nice. They were amazing hosts, and it made it very nice to be in the main place where everything was happening nap wise rather than having to always be heading back to a hotel. 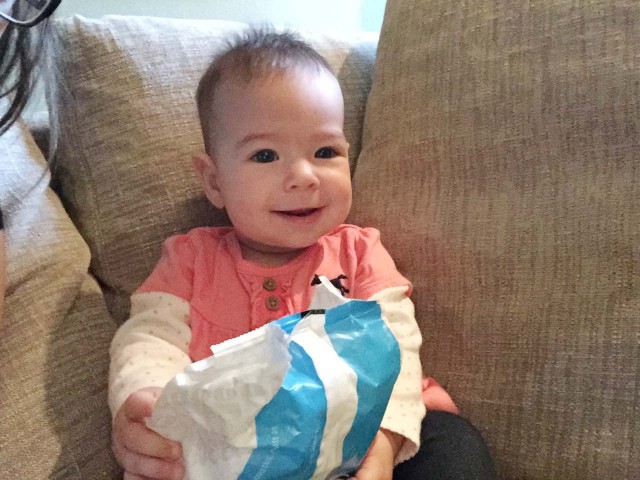 Reese the next morning after our arrival up and early even though we all were very low on sleep.

The morning was a blur of trying to get everyone fed, ready, and to the correct location at the correct time. 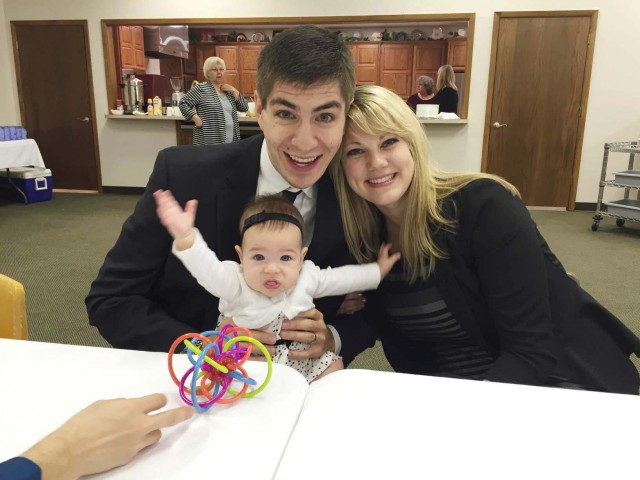 The church was kind enough to provide a meal for the family before the funeral which we have a big family, so it was no small undertaking. Here is Reese with Jonathan and Raya before we prayed and got our food. 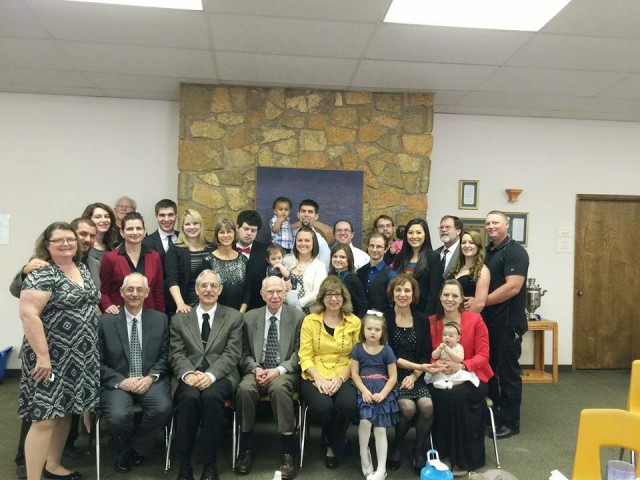 Here is a group shot of those who could attend. A lot of our family was missing due to living over seas, having premade unchangeable plans, or not being able to get off for work,etc.

The funeral was wonderful and sad all at once. My cousin Elizabeth is a Pastor and did a wonderful job sharing all of the memories and thoughts on behalf of all of my Grandmother’s loved ones. I loved that a family member was able to do the majority of the service, it made it feel so intimate. It was right during Reese’s nap time, so it was a blessing that the church had a nursery where I could see and hear everything going on in the auditorium while she napped in the crib there. I did get stuck watching a bunch of kids in the nursery once it was over, so it took a while for me to get said parents with their kids so I could pay my respects to my Grandmother and hug my Grandfather as well.

Once the funeral was over, we were all drained. We came home and were able to visit with some friends of the family that are considered family. Every single meal was provided for us which was a huge blessing. 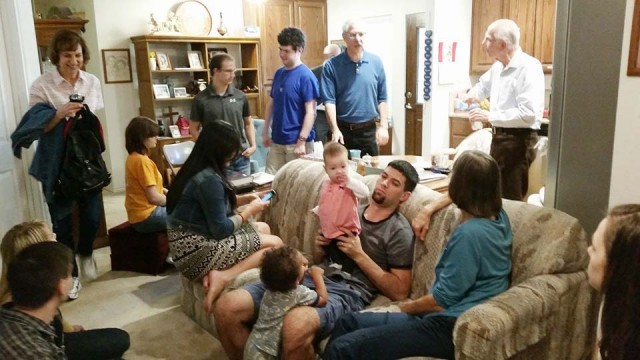 We were also able to get some quality time with Grandpa after it was over asking questions about how he met Grandma and about his life as a young man.

That night, Kira had to fly back out for work, and my parents and I decided to drive straight back through hoping Reese would just sleep the whole way home. It was her bedtime right after dinner, which is when we were ready to leave. It ended up being a very smooth drive back, Reese slept the whole way, and we made it in exactly 6 hours. My dad drove the first 4, and then he got tired. So I took over for the last two. We were all tired after that drive,but it was so nice being home. However, it was nice to be able to see some family we hadn’t seen in a while. 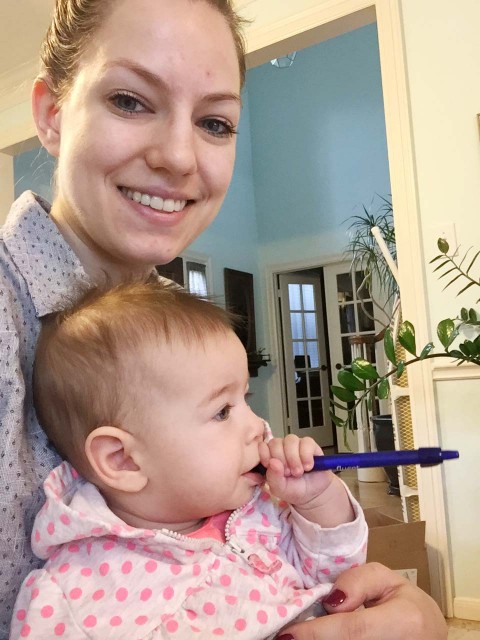 Since Reese and I came early for the funeral, I stayed with my parents until it was time for Grant and my other siblings and their families to join us which was another week. It was wonderful because I was just able to work remotely from my parents house. So here is Reese helping me work. 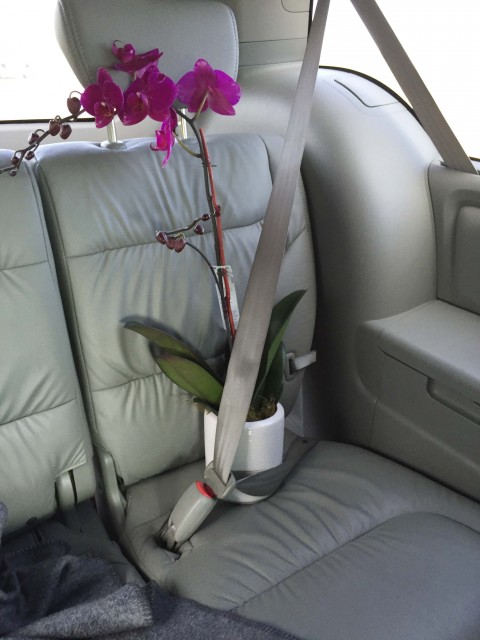 Life with my mother always includes plants;anyone who knows her would laugh at this picture. She had bought another orchid to take home. I tried to tell her Papa wouldn’t be pleased since she had literally over 50 orchid plants at that moment. 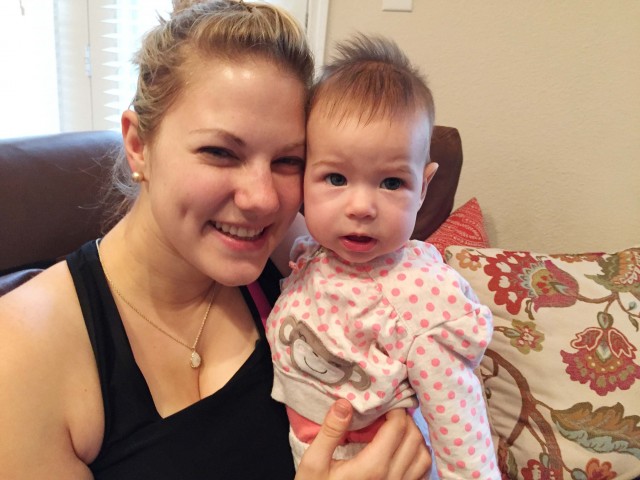 We got to visit Raya at her apartment before picking up Jason from School one of the days. 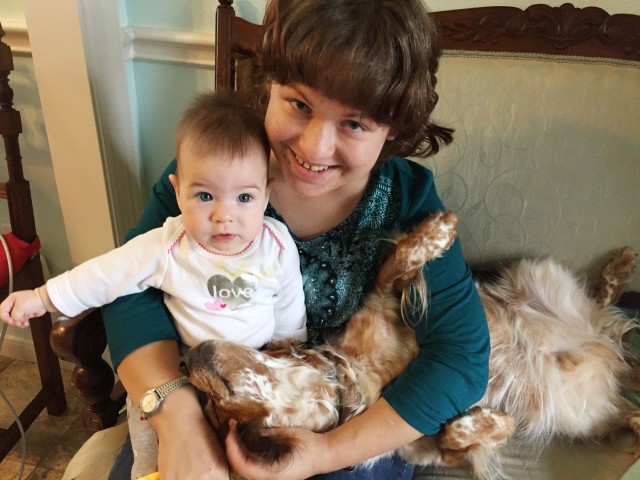 We also played a lot with Jhenya  and Jumper who Reese just loved. Jhenya was such a huge help with Reese when I needed to get work done. She was so sweet and so great with Reese.

Reese loved Jumper and all dogs for that matter.

All the new toys to play with were a huge hit at my parent’s house.

Stay tuned for the next portions of this trip.

[…] Here is the second portion of our Houston trip. To read more about part 1 of the trip, please click here. […]