This year for Christmas, I made some of the gifts, not necessarily because they were cheaper but because I had the time and the drive to make them. The break down of gift this year were 10 of our gifts were made, 10 were won, and two were bought. I was pretty happy with this because if I hadn’t won these giveaways, I don’t know if we would have been able to give everyone gifts this year or any at all. For my Dad, Nikolas, Jason, and Daniel, I made the pies in a jar found HERE. For Kira, I made a clutch purse; for Simon, Grant, Andrew, and Wilson I made toiletry bags. Then for my Mom, I made the necklace below. 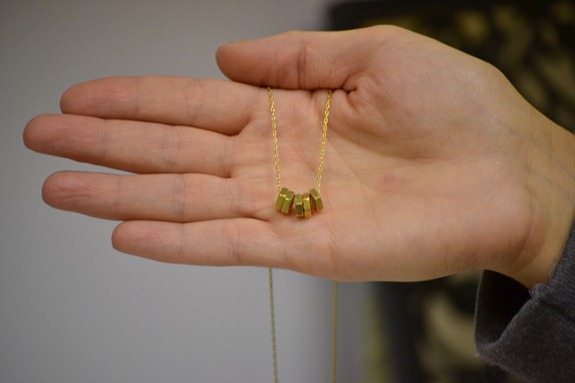 I made this necklace for my mom only, it was all silver. I wanted a nice quality chain which I was able to find at JoAnns in Sterling Silver. Then I had Grant buy five small nuts from Home Depot, I don’t remember the size because I showed him how small I wanted them. I know, such a girl move. I am glad that she liked it. 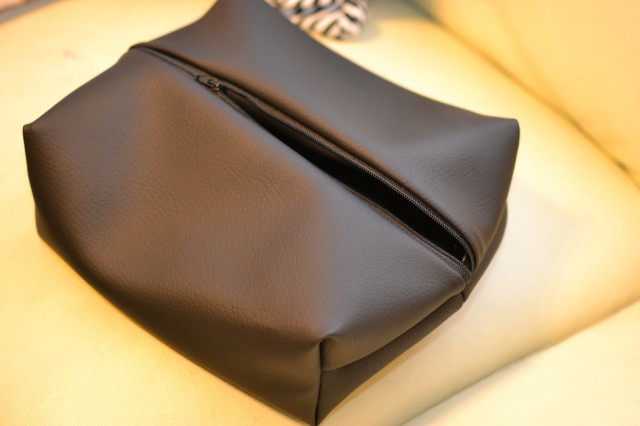 Then for the Toiletry bags, I made 3 like the next couple of pictures. I follow a tutorial HERE and was prettyÂ satisfiedÂ with them. 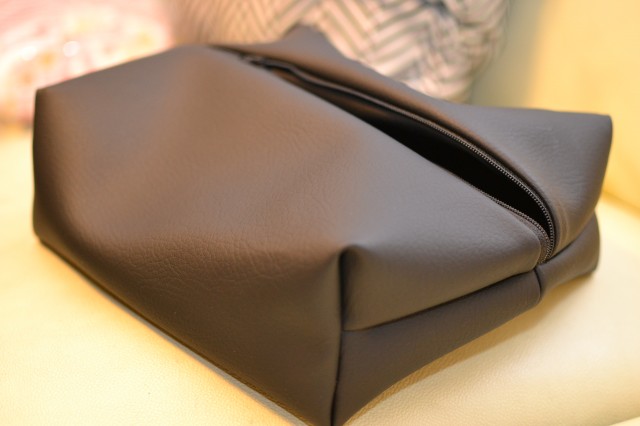 I wanted toÂ originallyÂ make them out of a suit material like HERE on the outside and a vinyl version on the inside so that you can wipe them out easily. Well, all of the fabric/craft stores were out of iron on vinyl so I have to come up with something else. 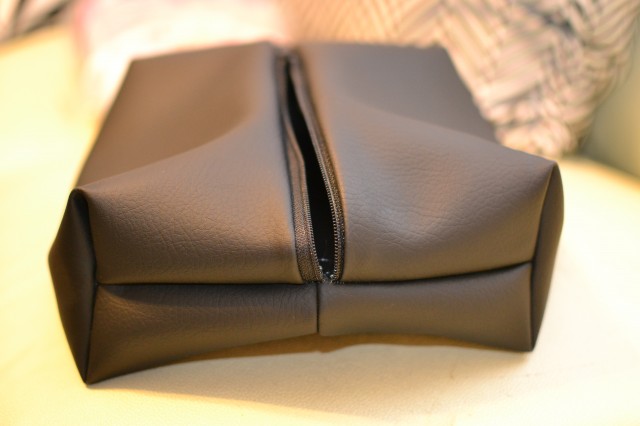 Then I decided to use this vinyl material that looks like a matte black leather, but it is really just a vinyl that can be wiped off. I liked how clean and masculine it looked. 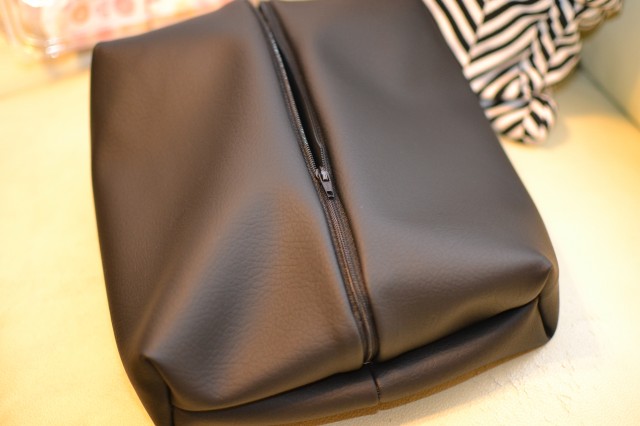 The only problem with this material is that it is really thick so when you are doing seams with 4+ layers it is a headache. I made the three and wanted to be done,but I still had Grant’s to do. I had Grant use one of the bags and tell me what he wanted different on his. Grant is very particular about things, and so I would rather show him his gift early Â to make sure that he liked it. 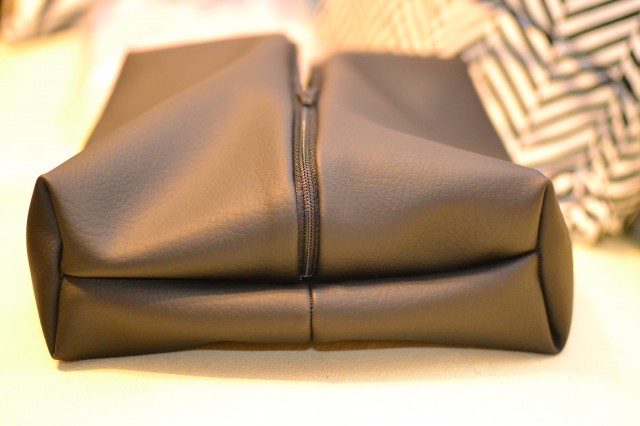 Grant asked for two things; he wanted a larger zipper with a bigger pull tab on it, and he also wanted a tab at one of the ends to make it easier to open and close. Â Before, I started his bag, I found another tutorial that showed a bag with pull tab and WITHOUT A SEAM ON THE BOTTOM right below the zipper!!!! 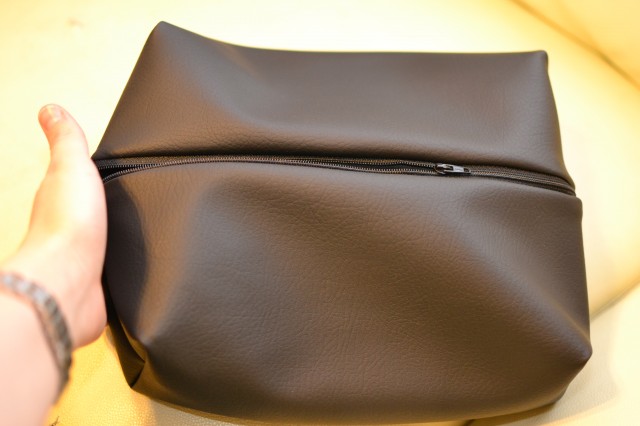 The easier tutorial to follow is HERE, but the one that shows how to make it multi fabric on the top is HERE. If you are going to make one of these, it is probably best to look at multiple tutorials until you know how it goes before you attempt it. 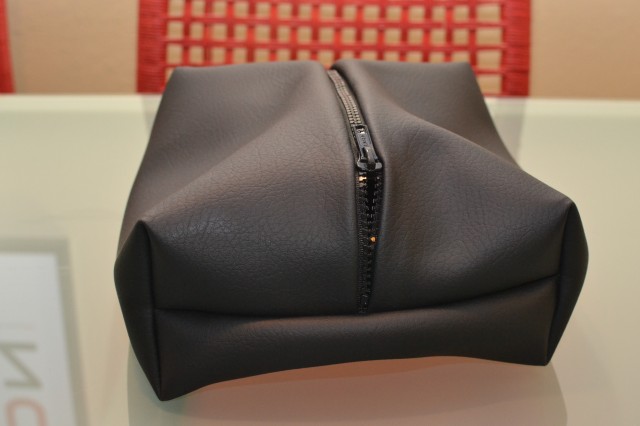 Here is Grant’s finished bag. You can see we got a much nicer zipper which was actually a separating zipper. I have never used one before, but I LOVED it since it made sewing the zipper on a dream! Now I wasn’t able to do the tabs, this fabric is just way to thick for a nonÂ commercialÂ sewing machine. I love how it turned out,and I love that it doesn’t have an ugly seam right down the middle. 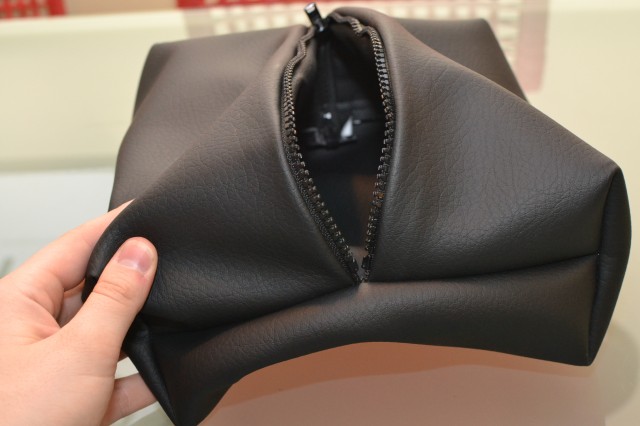 I am going to make myself one out of nice fabric soon and I will add a handle and tab to mine since it will be fabric and nothing as heavy, and I will post pictures about this too! I am also wanting to hide all of my seams for this bag with binding tape, and I found a tutorial HERE. 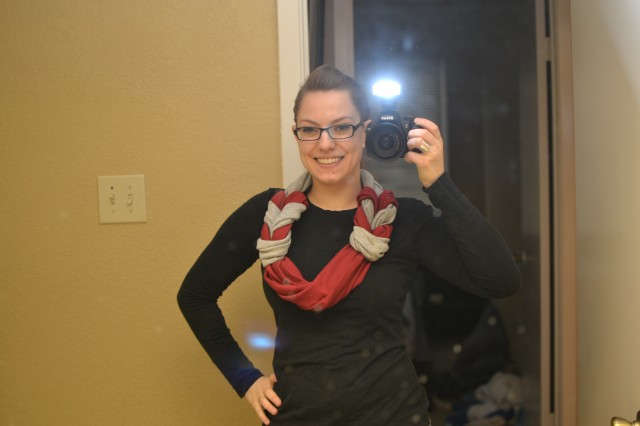 In our Young Marrieds group at church, we had a white elephant gift exchange, only most people just do the gift exchange rather than the white elephant part. So, I had a nice container of homemade laundry detergent that I made, and I made the same scarf as I am wearing above only with turquoise rather than red. I kept the red one for myself. I found the Tutorial HERE and HERE. 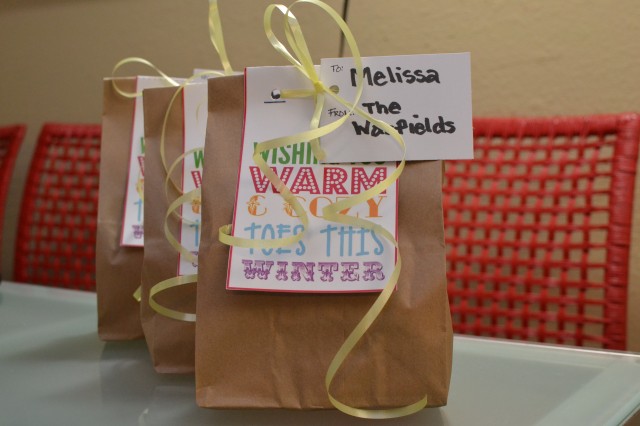 This gift idea came from HERE for my Boss’s wife and two daughters, he told me that they have PJ day on their first day of break. So, I got each lady a pair of nice fluffy, fun pair of socks from Target and a matching nail polish and put them in the bags above. Of course all of the nail polish colors were different since I am assuming they all share anyways. 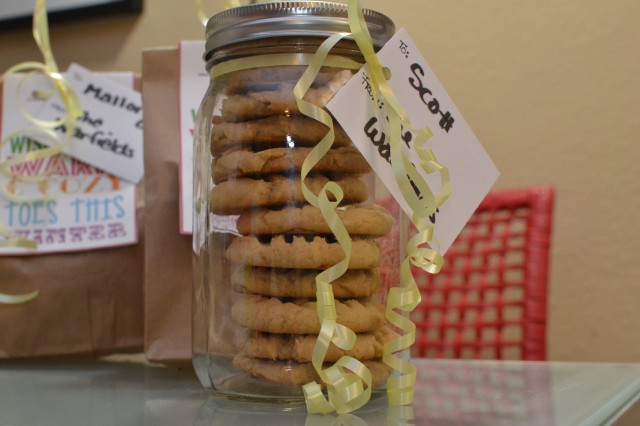 My Boss doesn’t eat very many sweets at all, but he said the one thing he likes is peanut butter cookies. So, I made some for him in this mason jar and some for the office. I later found out that he ate almost all of the office ones not knowing that he had this waiting for him. But I am sure he had to share these cookies too.

I won a ton of giveaways which I will post about later, but that wraps up all of the gifts for Christmas this year. Did you give or get any good gifts?

[…] sister, Raya, asked for a specific scarf for her birthday, and I had made one exactly like it two years before. This scarf ended up being a little to small so it was awkward to wear so I ended up taking it […]