Two Month Update – The stats for these posts are taken on the day Reese turned 2 months old, but all of the information and content is everything up until the point she turns 2 months old. (6/11/15-7/11/15) 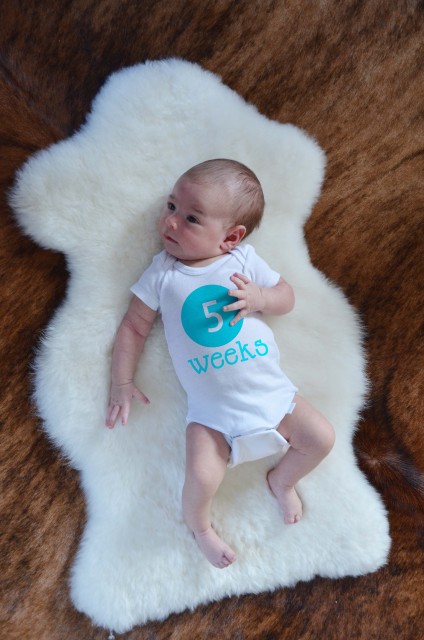 We missed week 6 🙁 (growth spurts are no joke!) 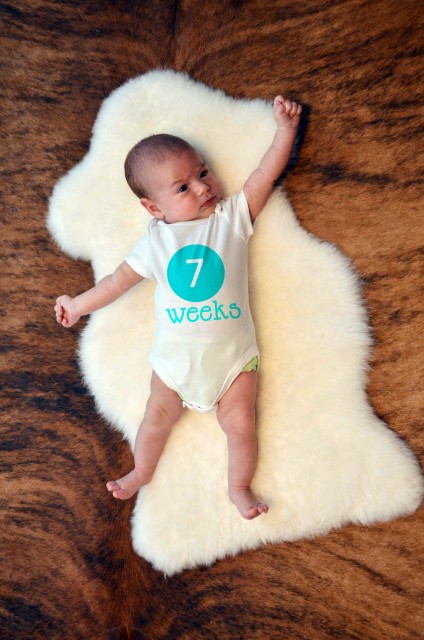 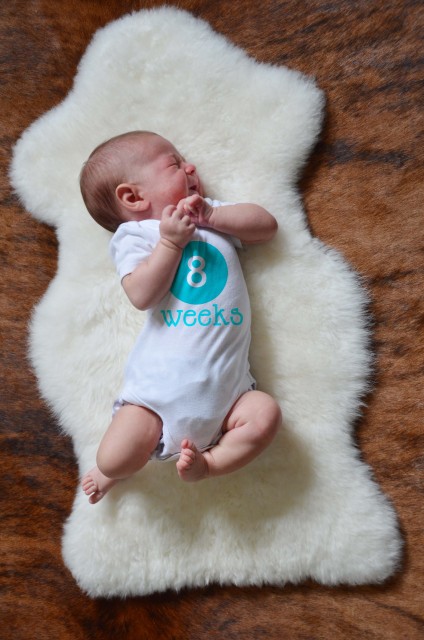 Surprisingly, Reese is the tallest of all of her cousins thus far, so we will see if she stays that way, or if she grows into her height. 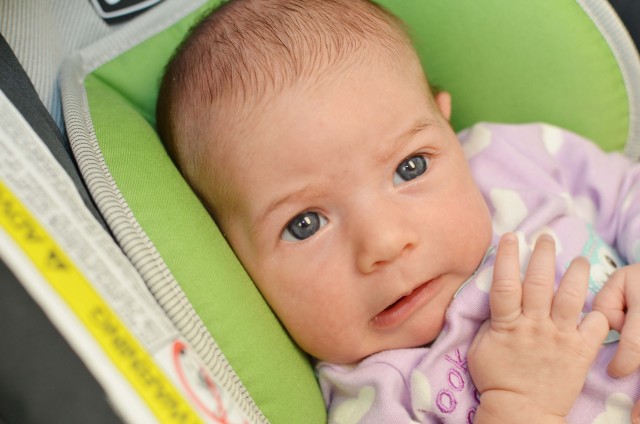 Reese still has blue eyes which we still wonder if she will keep. (My niece Alana now has brown eyes,but still had her blue eyes at two months so we will see.)

She got her vaccinations yesterday which were an experience. She got an oral vaccine which made her gag and almost throw up because of the taste and consistency. Then she got three shots, one in one leg, and two in the other. She definitely screamed and cried,but started to calm down once papa was able to hold her. Then I was able to nurse her after the appointment was over; she calmed down after that. After we made it home she was a little bit more cranky, nursed, and took a nap. After that she woke up from her nap hysterical. She screamed for over 30 minutes no matter what I did; she wouldn’t even nurse which NEVER happens. 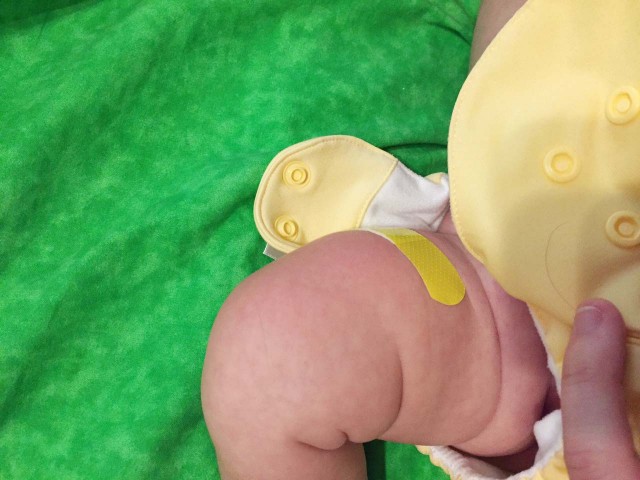 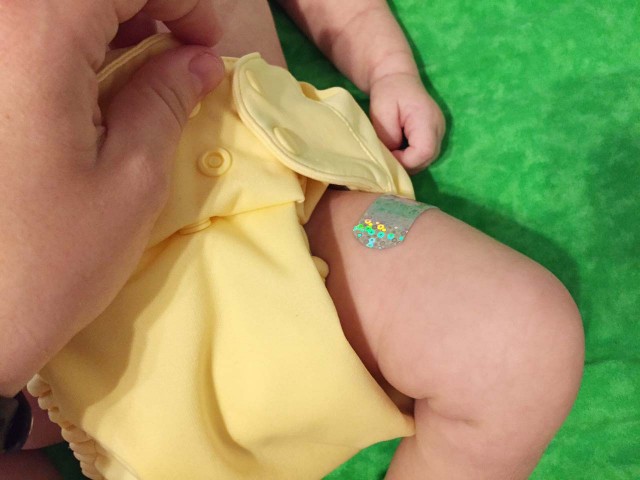 One of her thighs was very swollen and red, so I had to call the pediatrician’s office. They had me give her baby tylenol which I’m not even sure she got any of it because she spit it all up, do warm compresses on the thighs, and then bicycle her legs. After doing that for a while, she finally calmed down and went to sleep at 4:30pm. We woke her up 9pm to give her more tylenol(with a much better method described to us by the nurse over the phone so she actually got some in her system), checked to make sure there wasn’t any swelling, no fever, changed her diaper, changed her clothes, got her to nurse, and put her down for the night. The next morning she was her fine smiley self,but boy did that kinda freak us out. At least I know what to do next time to make sure she doesn’t have as much pain.

This month was a month full of changes for Reese!

At 6 weeks old after her growth spurt ended, Reese was moved into her own room and crib. 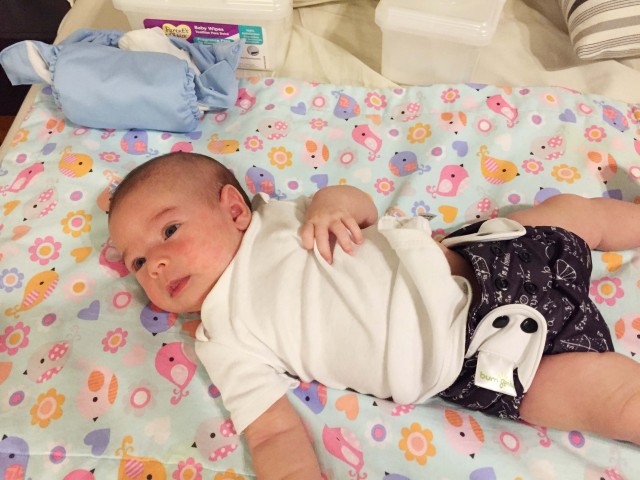 Reese also started wearing her cloth diapers. We love them so far as she really doesn’t get rashes unless I accidentally get peanuts, beans, or dairy in my food. We use THESE & THESE diapers. I will do a blog post soon about our cloth diapers and our routine with them.

At 7 weeks old, Reese started sleeping through the night. She started giving us 8-11 hour stretches. She normally goes down around 6:30-7:30pm and will wake up around 4:30-5am to feed. Then I put her back down, and she will sleep another hour to two hours depending on her mood that day.

At 8 weeks old, I “went” back to work part time. I still work from home, and now it is only part time. I work during her naps, and normally after I feed her at 4:30/5am I get up and do around 2 hours of work while she sleeps before I help Grant get ready for work. 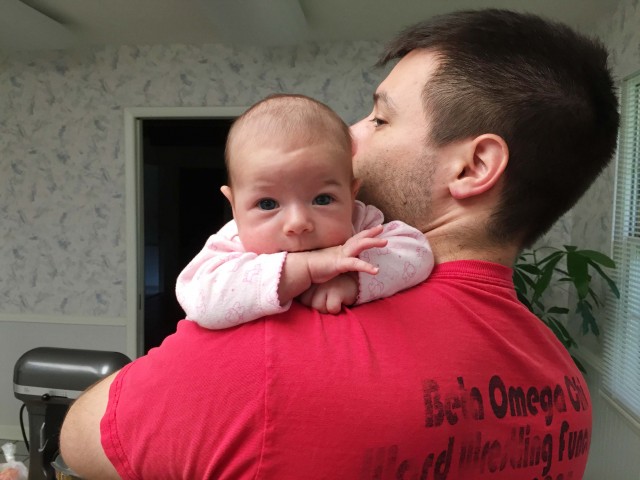 Reese loves to be held especially over the shoulder so she can see what is going on. She now likes being awake in her swing for a few minutes because she likes the mirror it has as well as the bees and leaves that spin. She has started really tracking things with her eyes and head. She also following us as we move around with her eyes and head.

Reese is starting to like baths more and more especially once we learned that she likes the water warmer than we thought. She does NOT like being cold.

Reese doesn’t like having a dirty diaper,but is very calm and cooperative during diaper changes which makes it very nice.

Reese has been smiling and cooing a lot more with both Grant and I. It even seems like she is trying to talk to us, for instance if she is mad at me because I couldn’t get her out of the car seat fast enough she will do a cry in different intervals, tones, and pitches. Almost as if she is telling me her displeasure. During these times, I feel bad when she is crying,but it sounds so funny I almost laugh. Sometimes while nursing, I will play a video of Grant talking to her. Grant won’t be home,but she will stop nursing and start looking around or stopping to listen to her Papa talk. 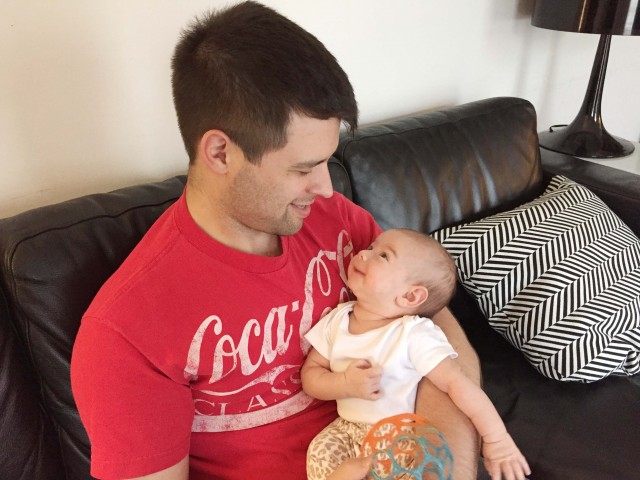 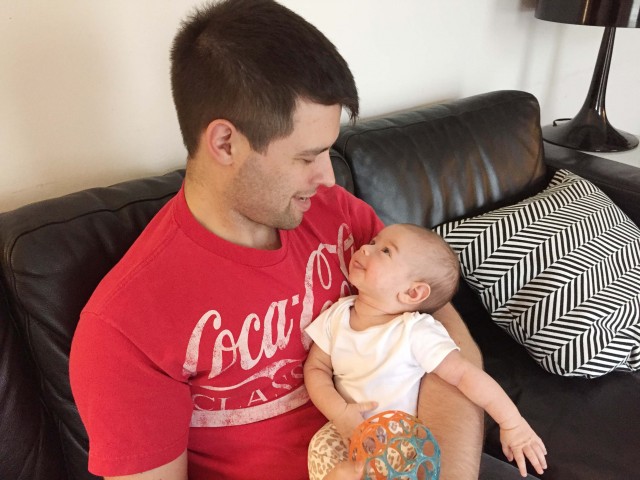 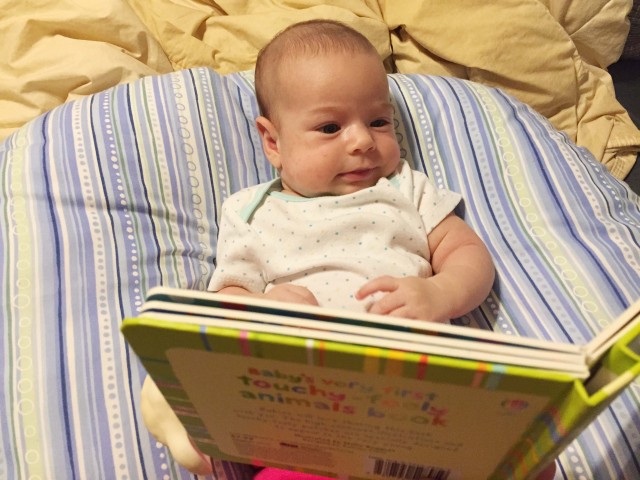 Reese likes when I sing to her, and has really started to actually look at the pages of books. She only has the attention span for about 1 or 2 at a time,but we are working on it. She still isn’t a big fan of the play mats since she isn’t batting at the toys yet. She will grasp your finger if you put it in her hand and hold on very tight.

Reese does really well at tummy time when she wants to. If she isn’t in the mood, she will just lay her head sideways and hang out until she starts crying or you decide to move her. When she is in the mood, she can get her whole chest up. We practice with her doing different moves other than tummy time to help her build strength. We found THIS great video on developmental norms at two months old. (*Warning, there are some naked babies in this video*) 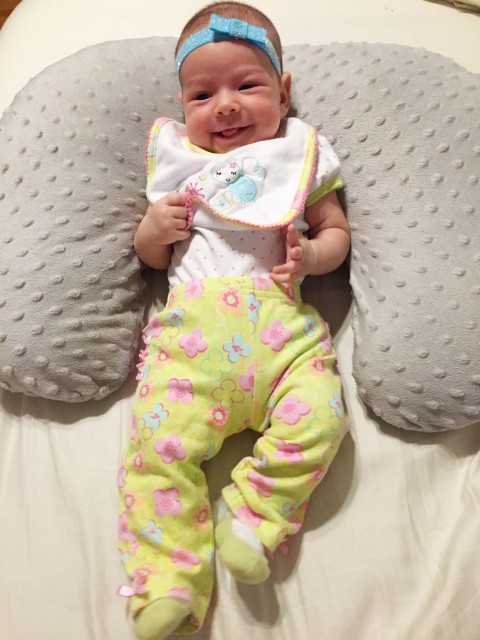 As mentioned above, Reese is very tall, so she is wearing 3-6 month clothes. She is still very skinny,but is starting to get some rolls, and her doctor is happy with her weight gain. I was slightly nervous that she wouldn’t get enough food once she started sleeping through the night,but so far she has been doing great. I am very willing to feed her as often during the day as she wants especially since she is sleeping so well. Right now we are shooting for at least 8 good, full feedings a day since she doesn’t get up at night. 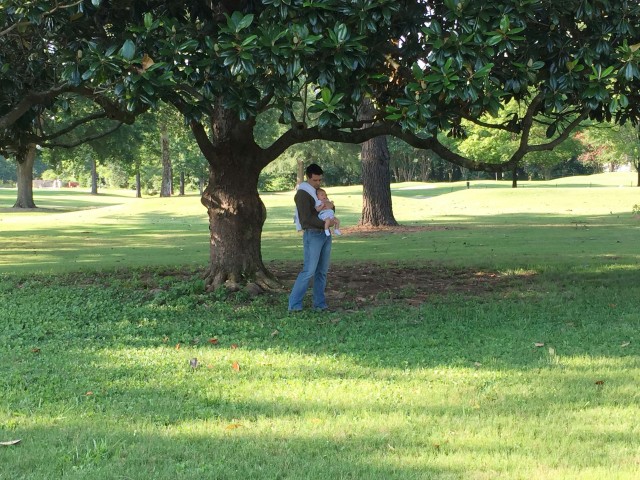 Reese still loves being outside, and most mornings she and I get a walk in after I finish my morning work, and she is up from sleeping. I take her out in the Ergo, and she will either be quiet and happy looking around or asleep because of the calming bouncing of walking. So normally we get in a nice 40 minute walk if it isn’t too hot outside. Or we still take that long of a walk, but both end up having to change clothes since we are soaked, but we still have fun. 🙂

Reese has started sucking/gnawing her fist a lot this month. Our chiropractor thought she saw some tooth buds, so I’m interested to see if she is already teething, or if it will take months for her first teeth to come in.

As far as her sleeping, as I mentioned above, she is truly sleeping through the night which is WONDERFUL. Everything is so much easier when you are getting sleep! We aren’t sure if Reese is such a good sleeper because we just got lucky or if some of it had to do with”parenting.” We started having her cry it out around 4-5 weeks old during the night feedings. What I mean by that is, I fed her, diaper was changed, and put her down in the pack and play. We would let her fuss for 5 minutes with a timer set to see if she would fall asleep. It was soo hard,but I think it helped some. Also, we noticed around weeks 4-5 that during the day she would nap 3 to 4 hour stretches consistently, and then at night be up every 1-2 hours. So, I felt like a jerk,but I started waking her up every two hours during the day to feed no matter what. After that, her nights started getting better and eventually sleeping through the night. We also were using the swaddle me blankets because Reese likes to be swaddled, but she was getting to tall for them where she couldn’t have her legs straight anymore and got her hands out of the bottom. If we moved up sizes she was too skinny and could get her arms out completely. She likes to have her fists right under her chin,but isn’t ready to have them out of a swaddle because she still will hit or scratch herself in her sleep. 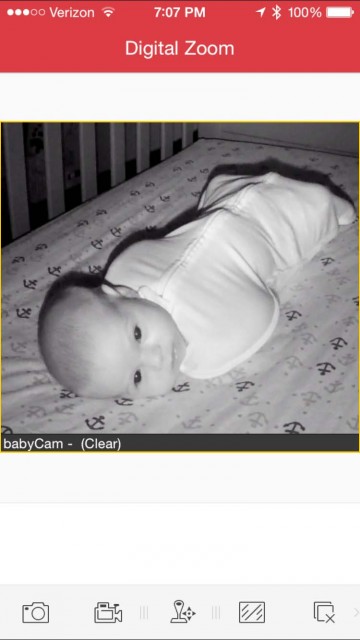 This is Reese in her woombie wrap in her crib. She looks alien like because this is the image from our baby camera.

So we got a woombie swaddle and LOVE it! It is much longer, and eventually if she still needs one, I might sew one myself. It took us a while to find her nap rhythm during the days since she was fighting every nap. I now realize that I was trying to put her down too early. So now, she takes 3 naps a day they range in length from 45 minutes to 2 hours. She stays awake between 1.5 – 2 hours between naps. We try to put her down drowsy,but still awake. 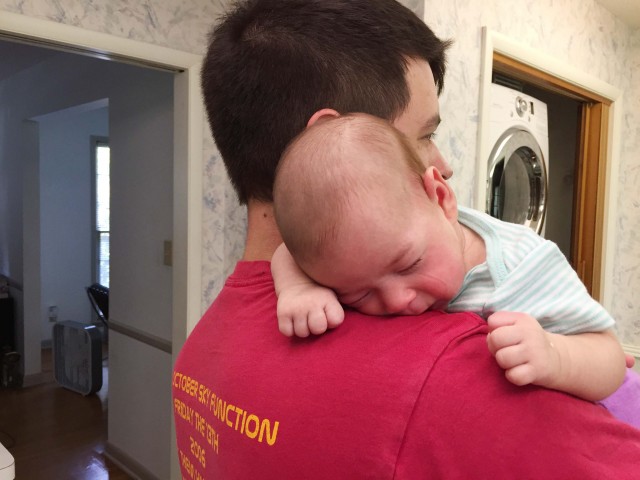 Sometimes she falls asleep faster than we anticipated. So we are slowly trying to make it more and more awake so she will be a good sleeper and won’t cry it out for a long time. We will really start implementing this more strictly around the 3 month mark I think. 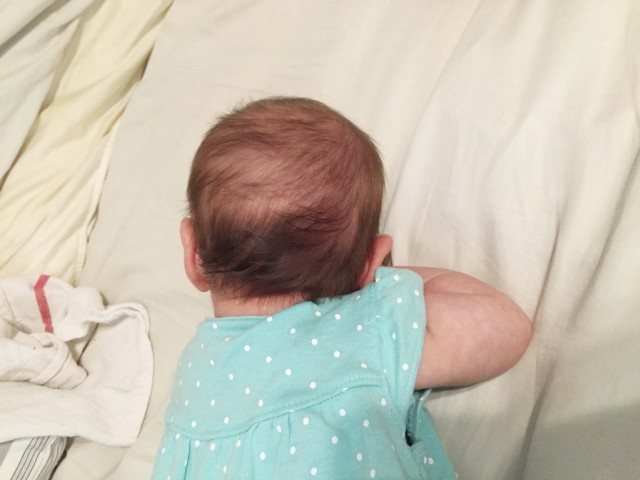 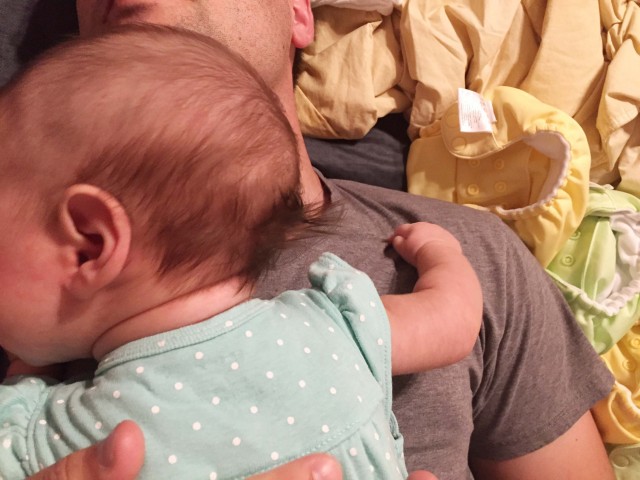 Reese still has her mullet and the hair in the back is getting much thicker and longer. On top she is getting more hair which are longer than the hair currently there so it really looks comical sometimes.

We honestly still don’t feel like parents most days, but boy do we love our little Reese! In a few weeks, we will be traveling with Reese for the first time, and we are hopeful but slightly anxious on how that will go.

Have a great weekend!