We have been very fortunate that Reese has been a very healthy kid. So far, she has had one ear infection while also having a virus so it was pretty rough for her,but other than that nothing. Well this weekend we were having lots of fun going to a splash pad after which Reese was just fine drinking lots and took a decent nap. 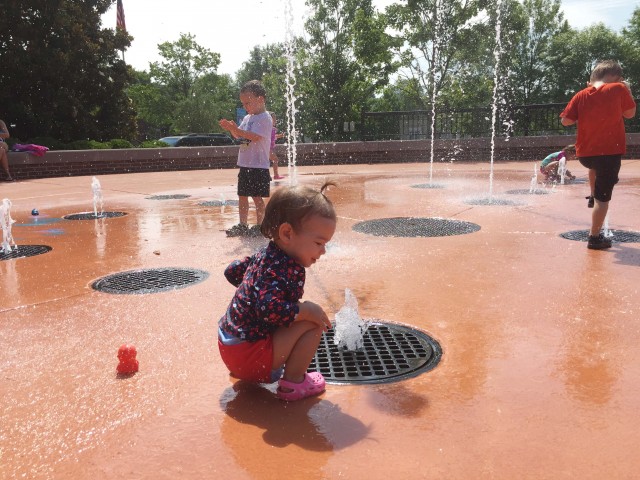 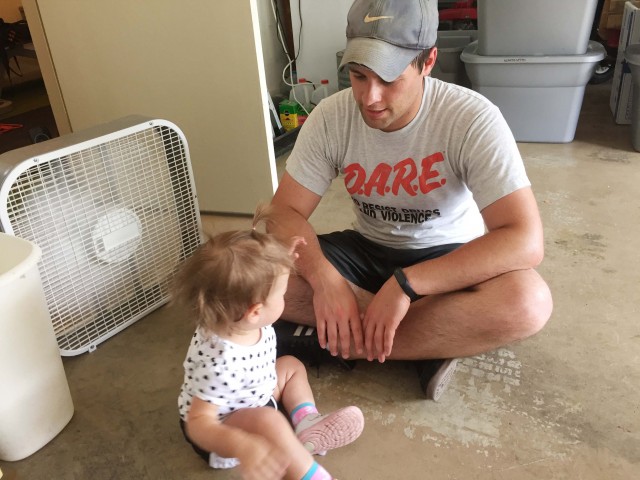 Playing with Papa after he cleaned the garage out.

After the nap, she was getting more whiny and cranky, and then we took her on a walk, and I think the heat really got to her. We didn’t realize she wasn’t feeling 100% so we went shopping at Target. After we got home, we realized she was pretty hot. So we tried to cool her down, and took her temperature to be safe. Well, it was above 103F. We gave her tylenol to lower the fever,but it wasn’t doing much, and she was starting to act lethargic, had shortness of breath, and refused to drink anything. So, that kinda freaked us out since she wasn’t acting like her normal self. We got to the ER around 5:40pm, and were seen in the triage around 6:45pm where the nurse said her temperature was only 98.1, but she said she felt hot. I’m not sure why the nurse tried to only take the temperature under her arm because we all knew it wasn’t very accurate. Around 7:30pm we were taken to a room,and at this point Reese was starting to perk up a little bit. 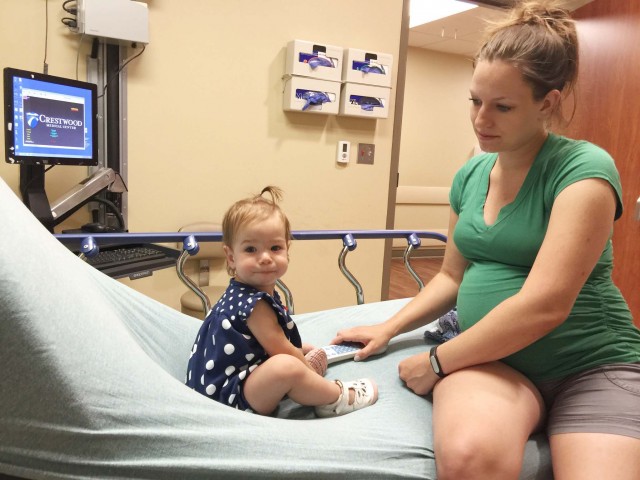 She was not happy about not being on my lap.

We felt kind of stupid for bringing her because she wasn’t as lethargic,but we figured better be safe than sorry. We wanted to make sure she didn’t have a heat stroke or anything like that. They checked her out including her ears and everything looked fine. They wanted her to eat a popsicle before checking her temperature again before they would release her. Around 8:30pm, the popsicle had finally completely melted where we could get her to drink the fluid via straw cause she wasn’t wanting to eat or drink anything especially not something so cold. During this portion of the visit we heard a few funny things that were said to the multiple people that came and went across the hall in another room. One of them was, “Have you ever had a blood clot before?” Which shouldn’t be funny, but the way it was said seemed like something that a patient would have mentioned if it had happened to them before. However, I understand a lot of these things are asked out of necessity.  Then when some of the patients were being wheeled away to other areas, Reese would wave and say “Bye, Bye.” 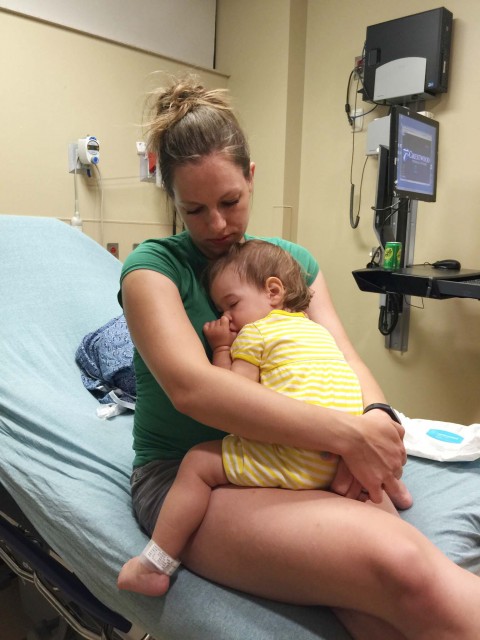 She was so tired since it was over 2 hours past her bed time. 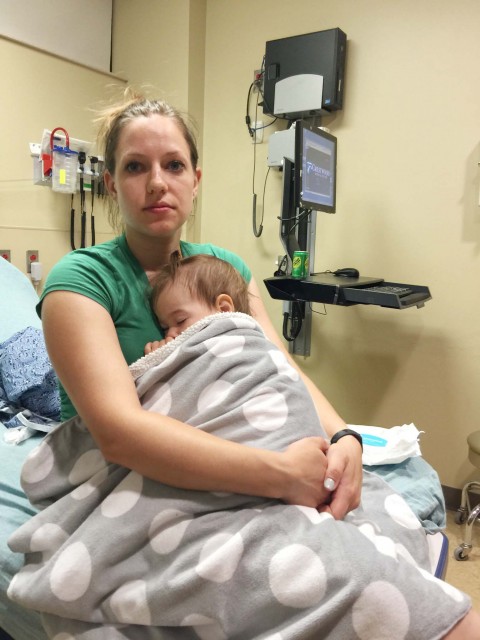 I’m not a fan of Reese being sick,but the extra cuddles were nice.

It was now 2 hours past Reese’s bed time, she was just so tired and just wanted to go home. Finally the nurse came back, took her temperature rectally, and we found out it was 101.5 F. So still higher,but not in the danger zone. So, they released us, and we got home around 9:30pm. That night, her temperature kept going above 102, so we had to set alarms to check her temperature and wake her up to get medicine to drop it down. She was very pitiful didn’t sleep well, and was whimpering in her sleep. At first, we put her down in her crib,but then after the first dose of medicine, we kept her in our room in the pack n play just so we could hear her better just in case.

The next day was Sunday, and she had a fever all day around 101-100F. So, we didn’t have to give her any medicine,but man you could tell she felt bad. She was cranky, clingy, would actually cuddle, hardly ate anything,but she was at least drinking so that was good. 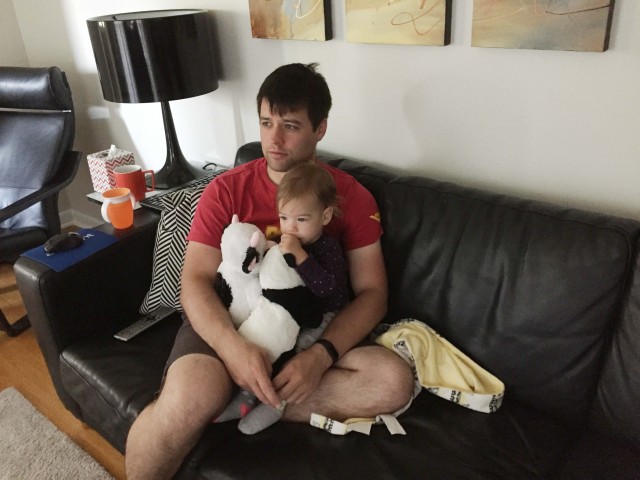 Cuddling with Papa, Frank the Panda, Cow, and her blanket. 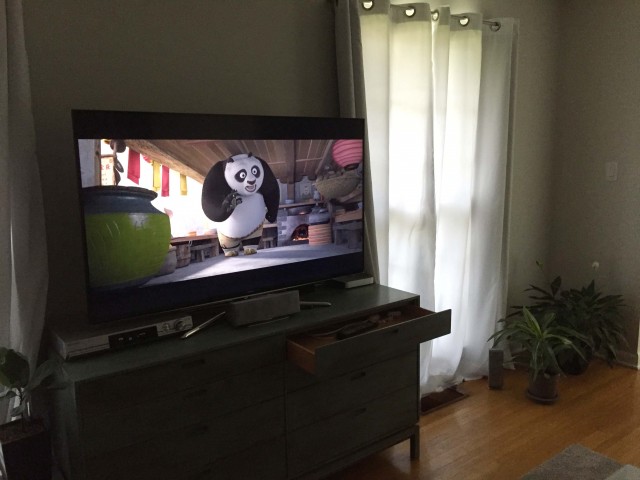 We let her watch some Kung Fu Panda since she loves Panda Bears,but since we never watch TV with her ,she only watched for about 15 minutes before wanting to be done. 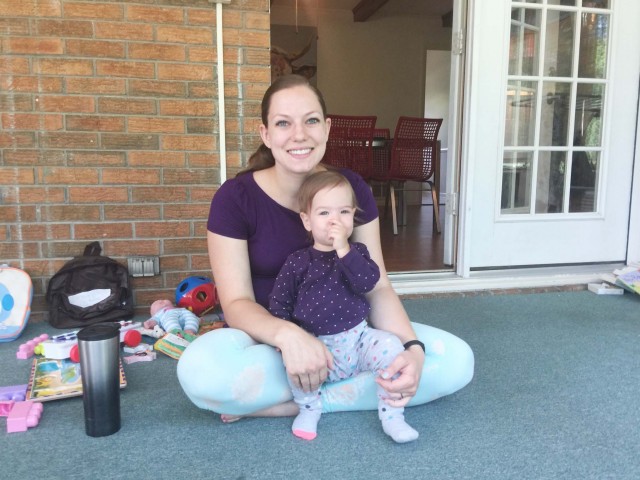 We coordinated on accident.

She had one or two times where she perked up and played before starting to feel crappy again. I actually was scheduled to work in the nursery during Worship. So I drove there while Grant watched Reese, only to be told I wasn’t needed. So I dropped off some shower gifts, and headed home to be with Grant and Reese. 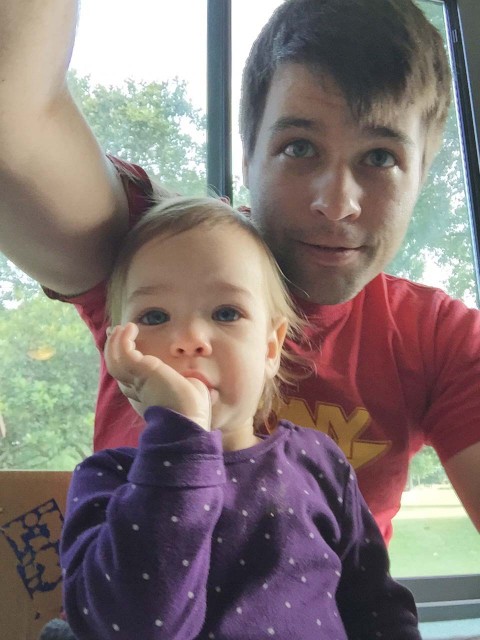 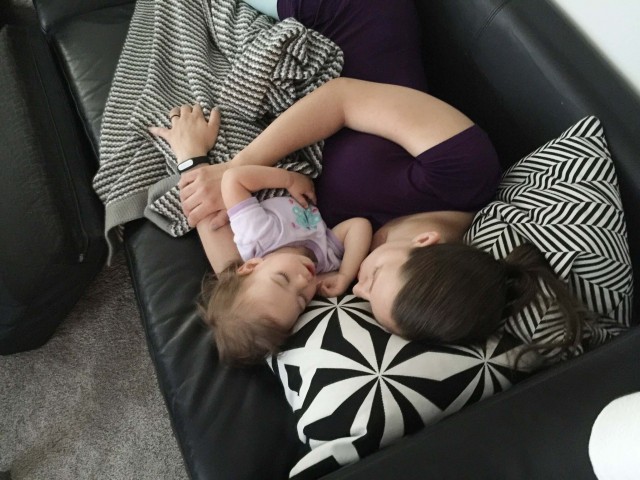 We got to take a nap together which never happens these days.

Reese took a short nap in her crib, and then another one on the couch with me. She went to bed super early because she was acting tired, and slept a total of 13.5 hours, but woke up her spunky self. The fever broke overnight which is wonderful. We still don’t know 100% what was wrong. We do know she got her 8th tooth,but she normally doesn’t get a fever that high or act lethargic while teething.

We took it easy today to make sure she was close to 100%, and she napped and ate well. 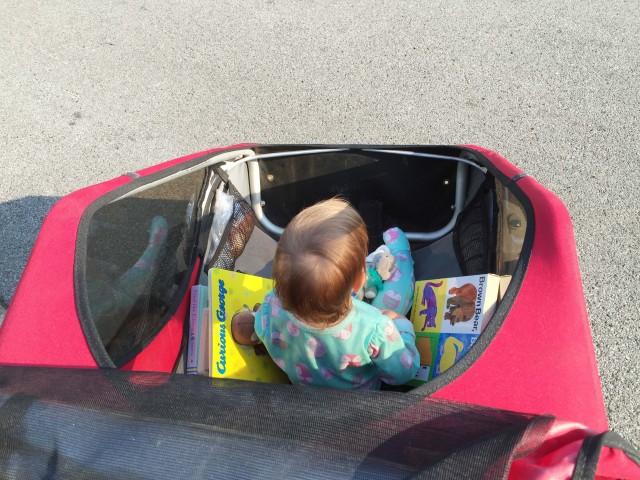 We took a short walk this morning while it was super early and cool out. 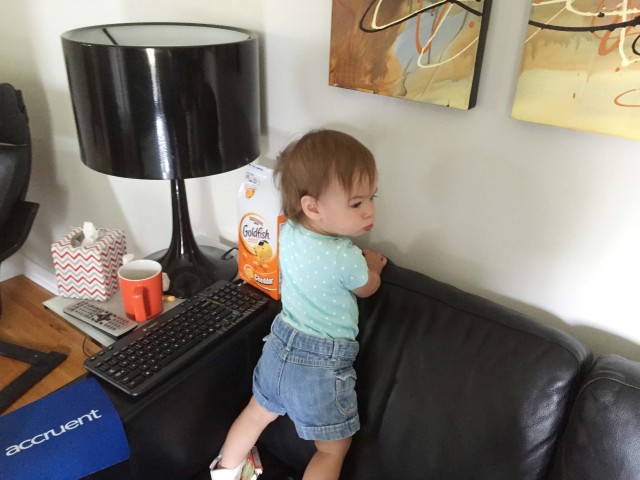 Reese found the stash of goldfish we forgot to put away, and I found her stuffing her face in the living room. 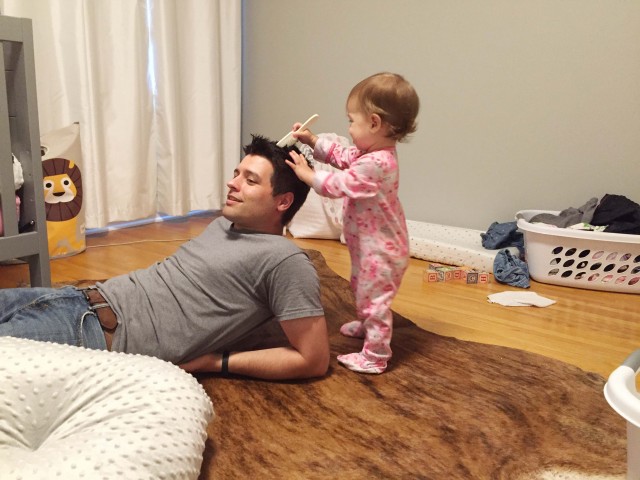 Before bed, we spent time brushing Grant’s hair because that is more fun than brushing hers apparently.

Needless to say, we are glad we have our babbling, energetic Reese back, and glad there wasn’t anything more serious wrong.

I know how scary it can be when they are sick, but can’t tell you what’s wrong. So glad she is feeling better!