Here is a quick update on Reese. She had her 15 month check up, and below are her stats. 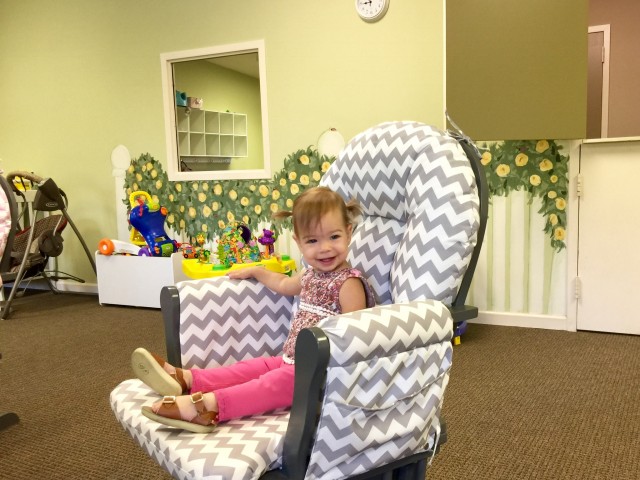 Reese is skinny and tall,but growing very well. She got three shots today, but won’t have another appointment until her two year check up. She had an ear infection last week, but I wasn’t 100% sure it was gone yet. Well, at today’s appointment, we found out the first ear infection wasn’t gone, and it turned into a double ear infection poor kid! So she is on a stronger antibiotics, and some probiotics to help out her good bacteria. Reese has adjusted to “school” really well. She waves, smiles, and says “Bye Bye” in the drop off line. She still cries when I pick her up,but it is mostly a laugh which morphs into a fake cry. Her teachers say she is always happy which is wonderful to hear. She eats her lunch well(I was worried she would be so distracted by the other kids that she wouldn’t eat as much.) She has already had her share of a runny nose since going to school,and has managed to get Grant and I sick as well, but we expected this to happen. Reese is starting to get excited when she sees other babies, and if a baby is crying in a story book, she does a fake cry and points to it to show that she knows what it is doing. Reese is teething with all four of her molars right now. One is more than half way through, one has two peaks out, and the other two are very close if not already having a portion out of the gums. She is still sleeping like a champ. At first we thought the teething was keeping her up,but it was the first ear infection, but since those 2-3 days has been wonderful. Right now Reese loves grapes, any berries, nectarines/peaches, and goldfish crackers. There are a lot of other things she likes a lot,but those are always the things she gets most excited about. Reese is almost out of 18 month sleepers, and most 18 month pants still fit,but the 18 month shirts are getting too short because she has such a long torso. Reese still loves panda bears, Elmo, reading books, and singing songs. Lately she requests wheels on the bus, the itsy bitsy spider, and twinkle twinkle little star the most.

She is bringing home artwork from school, and we can tell she is very proud of it. She will demonstrate how the art was made for us like putting her hand on the paper where the handprint is shown. This month in school they are learning the number one and the color red. So we have had lots of cute red hand and foot print art on the fridge right now.

We love that Reese still does Baby sign language as it makes life so much easier that she can commute to a certain extent with us. We still go to story time at the library on the days that she isn’t in School, and she really seems to enjoy it, especially when there is a song where she gets lifted into the air. Reese loves playing with legos especially pulling the hats/helmets off of all of the lego men. She is very good with her fine motor skills so it is fun to see her slowly stacking things or taking markers out of a bag to put them right back in again. Reese loves going down slides at the playground, and is finally getting more into exploring at the playgrounds which makes it a lot more fun. She will just stop and watch other kids play which is really cute too. Reese still eats really well, but will randomly decide she doesn’t want certain foods one day to the next it changes. She is really starting to recognize places. She LOVES pizza, and knows that the Walmart that we shop at has a pizza sign as advertisement outside of it. So even if we are driving past that Walmart, she will point and say MMMM. Reese loves animals especially dogs, and also loves stuffed animals and dolls these days as well. She really likes trains and frogs as well, and likes doing noises for both of these things or pointing them out in books.  If you ask her where baby brother is, she will walk over and touch my stomach. She has no clue what is coming,but then again neither do we. 🙂

Reese still sucks her thumb espeically when she is uncomfortable or nervous. We are still cloth diapering, and even her school allows cloth diapers which is wonderful. Due to times of sickness, teething, and the age temper tantrums and whining has been at an all time high. It is hard to know which situations to disciple for, and which to make allowances for. Since she has gotten the ear infection more under control, the whinging has gone down significantly so that is nice. Reese can now turn around in a circle which we saw for the first time, she will occasionally walk on her tip toes, can shake her head on command, can bend her head/neck from side to side, can stomp her feet, can clap, can beat her chest with fists like a gorilla, can swing her arms like a monkey, and can kick out like a donkey. She can also click her tongue, blow her nose on command(not as good as an adult,but pretty well), identify her eyes, mouth, tongue, chin, ears, lips, nose, knee, belly button, hands, and feet.  Reese will give you a kiss if you ask, and sometimes when you hold her with rub or pat your back/shoulder.

Reese likes baths, LOVES playing in the rain, and being outside in general. Reese will now whisper Papa rather than just mouthing the sounds and chuckling. We always send Grant off with waves as he heads to work, and we always greet him when he gets home. I think these times are highlights for Reese and Grant. There are so many more things I could say,but will have to cut it off here for now.